The judicial finding that the Defense of Marriage Act is unconstitutional, preceded by DOJ's vigorous defense of DOMA in another case, some waffling, and then the announcement that the DOJ will not defend the constitutionality of DOMA, which some characterized as a constitutional crisis,  has seriously compromised the future of DOMA. 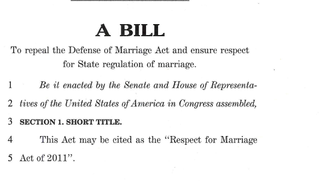 Today, Senator Dianne Feinstein introduced the Respect for Marriage Act of 2011, which would repeal DOMA and change the federal law to provide:

The precusor Respect for Marriage Act was previously introduced in 2009.

Amending the Orders: To add your same-sex domestic partner to your orders, you will need to provide your HR Assignment Technician with an updated Foreign Service Residence and Dependency Report (OF-126), a completed affidavit Pursuant to Declaring Domestic Partner Relationship (DS-7669 ), and a medical clearance. The DS-7669 affidavit should be submitted to the State Department’s Bureau of Human Resources, Office of the Executive Director, Assignment Support Unit (HR/EX/ASU). As soon as your HR Assignment Technician has all of these documents, he/she can process your orders. Guidance can be found at 3 FAM 1600. In addition, if your partner is not a U.S. citizen, please note procedures outlined in 12 FAM 275 – Reporting Cohabitation with and/or Intent to Marry a Foreign National (http://www.state.gov/documents/organization/88344.pdf) or contact HR/CDA.

For non-US partners, this will include an alteration of the immigration policies, to include a same-sex partner that would not be included ordinarily:

Foreign-born partners holding non-U.S. passports: If your new partner is not an American citizen, he/she may be able to enter the U.S. on a J-1 visa. In February, 2011, the Department designated the Bureau of Human Resources as an Exchange Visitor Program (J-1 visa) sponsor for a government visitor program under which non-US-citizen same-sex domestic partners (SSDP) of members of the Foreign Service may be eligible to come to the United States during their partners' domestic assignments. . . .

Strictly speaking, this process is not barred by DOMA, but it does cast even more doubt on the federal government's committment to enforcing DOMA.

Meanwhile, earlier this month Speaker of the House John Boehner issued a statement entitled House Will Ensure DOMA Constitutionality Is Determined By The Court:

“Today, after consultation with the Bipartisan Leadership Advisory Group, the House General Counsel has been directed to initiate a legal defense of this law.  This action by the House will ensure that this law’s constitutionality is decided by the courts, rather than by the President unilaterally.”

Listed below are links to weblogs that reference Is DOMA's Demise Imminent?: