Some will be watching today's "Superbowl" in the Cowboys Stadium as a sports event, but for constitutional law fans, the 1.3 (or so) billion dollar Stadium is an example of the Fifth Amendment's Taking Clause in action.  First, there is the taking of private property for public use.  In the case of the Cowboys Stadium in Arlington, Texas, the state and local government used eminent domain powers in residential areas.  Second, there is public financing used to support a privately owned by "public use" project, reportedly 3.25 million for the Cowboys Stadium.  In 1999, Professor Dale Rubin named the process a "constitutional disgrace" in his law review article on public aid to professional sports teams. 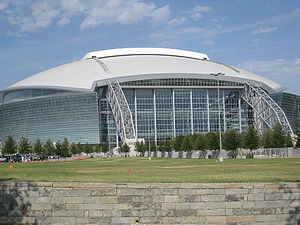 Listed below are links to weblogs that reference Superbowl Stadium: Constitutional Controversies: