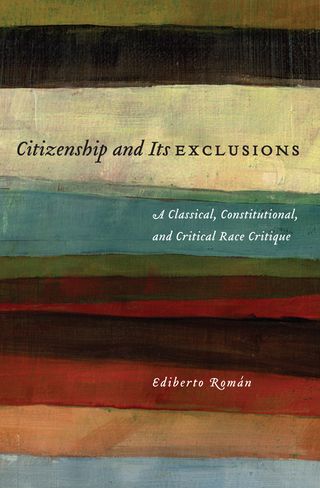 In Citizenship and its Exclusions: A Classical, Constitutional, and Critical Race Critique, Professor Ediberto Román offers a highly readable and trenchant discussion of historical and contemporary citizenship.

Román begins by discussing the cases of three "terrorists": John Walker Lindh, Yaser Esam Hamdi, and Jose Padilla.  He argues that while they were all U.S. citizens, they were "treated in dramatically different
ways":

Lindh, a Caucasian, was not treated as a terrorist and was characterized as merely a misguided young man. Hamdi, an Arab American, was effectively forced to renounce his American citizenship and was expatriated to the land of his parents, even though he was born and raised in the United States. Padilla, of Puerto Rican descent, was immediately treated as an enemy combatant and terrorist, with the limited rights associated with such labels. The stark differences in their treatment illustrate the dichotomous and confounding nature of citizenship, particularly when applied to favored versus disfavored groups.

Román thus argues that citizenship is "confounding," but he helpfully considers both dejure citizenship and defacto citizenship, exploring how formal and informal citizenship both contradict and reinforce each other.  His last chapter, “A New Vision of Citizenship,” articulates a coherent vision of constitutional citizenship that values inclusion rather than exclusion.

Román will be speaking about the book tonight at Books & Books in Miami, Florida.

Listed below are links to weblogs that reference Ediberto Román on Citizenship's Constitutional Dimensions: