At least one representative thinks so.  Chris Murphy is suggesting legislation that would: 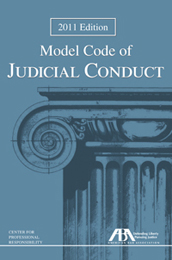 According to the Congressperson's press release, Murphy is prompted by the actions of Justices Scalia and Thomas in relation to "Charles and David Koch, billionaire brothers who operate a Kansas-based energy company."

The press release does not mention the controversy which swirled around Justice Alito last year regarding an American Spectator event.

Listed below are links to weblogs that reference Can Congress Regulate Supreme Court Ethics?: