The Judicial Nominating Commission in Iowa, the subject of a recent unsuccessful lawsuit regarding its composition, has sifted through the 60 applicants and sent 9 candidates for the 3 vacancies to the Governor.

There is one woman, one racial minority, and one law professor - - - and then there are 8 other candidates. 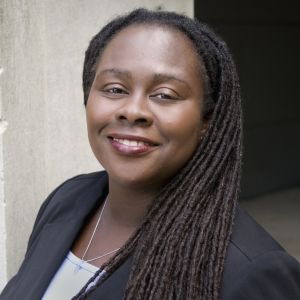 Angela Onwuachi-Willig, Professor of Law at the University of Iowa College of Law (pictured left) is also the youngest candidate, at age 37, according to The Des Moines Register.

Onwuachi-Willig is a prolific scholar on race, class, and feminism, including their constitutional aspects.  One of Onwuachi-Willig's most influential articles is Just Another Brother on the Supreme Court?: What Justice Clarence Thomas Teaches Us About the Influence of Racial Identity in which she argues that Thomas' ideology is deeply grounded in black conservative thought, which has a "raced" history and foundation that are distinct from white conservatism. She seeks to explain Justice Thomas's jurisprudence from a black, conservative perspective in cases concerning education and desegregation, affirmative action, and crime.

Listed below are links to weblogs that reference Onwuachi-Willig Among 9 Finalists for Iowa Supreme Court: