Several provisions of the Constitution of the Arab Republic of Egypt address the election of President.  The ongoing events in Egypt raise the possibility that the three decade Presidency of Hosni Mubarak (pictured right) is coming to an end. 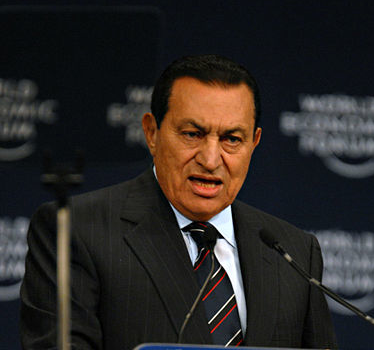 Article 75 provides that the President must be "must be an Egyptian born to Egyptian parents and enjoy civil and political rights. His age must not be less than 40 Gregorian years."  However, it is the next section that governs the process:

Article 76
The President shall be elected by direct, public, secret ballot. For an applicant to be accepted as a candidate to presidency, he shall be supported by at least 250 elected members of the People's Assembly, the Shura Council and local popular councils on governorate level, provided that those shall include at least 65 members of the People's Assembly, 25 of the Shura Council and ten of every local council in at least 14 governorates.

The number of members of the People's Assembly, the Shura Council and local popular councils on governorate level supporting candidature shall be raised in pro-rata to any increase in the number of any of these councils. In all cases, support may not be given to more than one candidate.
Procedures related to this process shall be regulated by the law. Political parties, which have been founded at least five years before the starting date of candidature and have been operating uninterruptedly for this period, and whose members have obtained at least 5% of the elected members of both the People's Assembly and the Shura Council, may nominate for presidency a member of their respective upper board, according to their own by-laws, provided he has been a member of such board for at least one consecutive year.

Three of the fore-mentioned public figures shall be selected by the People's Assembly and the other two by the Shura Council upon a recommendation of the bureaus of both houses for a period of five years. The law shall determine who will act on behalf of the chairman or any member of the committee, should there be some reason for their absence.

This committee shall exclusively have the following competences:

The committee's resolutions shall be passed with a majority of at least seven members. Its resolutions shall be final, self-enforcing and incontestable by any means or before any authority whatsoever. Its resolutions may not be challenged through construing or stay of execution. The law regulating presidential elections shall determine other competences for the committee. The law shall also determine regulating rules governing the nomination of a candidate to replace another one who has vacated his seat for some reasons other than assignment within the period between the starting date of candidature and before the termination of voting. Voting shall be conducted in one single day. The presidential elections committee shall establish committees to administer stages of the voting and ballot-counting process. The committee shall establish main committees to be composed of members of the judiciary to supervise the process in accordance with such rules and regulations as may be decided by the committee.

The law shall regulate procedures to be followed in the event the candidate has failed to obtain this majority. The President shall submit the draft law regulating the presidential elections to the Supreme Constitutional Court following endorsement by the People's Assembly and before promulgation, to determine compliance with the Constitution. The Court shall return its ruling in this connection within fifteen days from date of submission thereto. Should the court decide that one or more provisions of the draft law are unconstitutional; the President shall return it to the People's Assembly to put this ruling into effect. In all cases, the court's ruling shall be binding to all parties and all state authorities. The law shall be published in the official gazette within three days from date of issuance.

Listed below are links to weblogs that reference Egypt's Constitution: Presidential Election:

On its face Article 76 suggests that the constitutional succession of power ought to be legitimate. There is no provision suggesting that Mr. Mubarak's party (the National Democratic Party) would effectively be Soviet-style dictatorship that wins all the elections every time. However, the current constitution was amended about five years ago to reflect changes meant to loosen the grip of the National Democratic Party. As I understand it, these were created and passed after significant demands and at the insistence of a number of countries including the United States. I haven't looked at those earlier versions but the fact of amendment suggests that in operation, the NDP has been *the* party over the years, that the earlier constitutions reenforced the NDP's grip, and Mr. Mubarak has been the beneficiary of that over the past 30 years. Even with these amendments, as the article by Professor Stilt suggests, it is doubtful that they would automatically lead to the relinquishment of power by the NDP.

Even with the constitutional text that now grants multiparty elections, it has been noted by another commentator (see http://www.nyulawglobal.org/Globalex/Egypt1.htm) that the NDP is still significantly more powerful than any other political party. So, the fact of the matter is that the NDP seems to have the de facto political grip even if all of the politics here were fair.

I also find it quite interesting that under these provisions members of the judiciary has a role in directly supervising elections. The constitutional article also seems to leave the supervision commission as the final legal authority as to elections. So even though it appears that this doesn't create any conflict, at the same time, I find it unusual that the judiciary does not act as a neutral and separate arbiter of the elections. It would seem that structurally, the judiciary is frozen out of actual election administration or reform. (Moreover, so is the legislature since the legislative body cannot amend the rules because they are constitutionalized.)

Ultimately, the article seems structured to maintain the one-party state. Since there is no check on electoral power, either from the judiciary or the legislature, and given the NDP's significant political power, it would seem as if the law here does not aid the will of the people at all--and the demonstrations seem to be Exibit A for this claim.

You may also find interesting a 2007 study by Democracy Reporting International on the whole constitutional-legal frameowrk for elections: http://www.democracy-reporting.org/files/dri_egypt.pdf
While the problems with the electoral set up run much deeper than article 76, the article in question can significantly limit the field of candidates able to contest the poll (due to the requirement to have the formal support of 250 elected persons) thereby causing a highly limited choice to the voters. Surely it must be amended before any genuine poll can be held.

The country now has a new task and that is to select a new President and will undergo an election. This post will guide the people on how to choose wisely this time for a candidate who possess the quality the people are looking for in a leader. Vote Wisely this time so that history will not repeat itself.