The regulations at issue were a series of content-based restrictions intended to protect the public from potentially misleading advertising by attorneys.  N.Y. Comp. Codes R. & Regs., tit. 22, § 1200.50(c) provided in relevant part that

(c) An advertisement shall not:

(1) include an endorsement of, or testimonial about, a lawyer or law firm from a client with respect to a matter that is still pending . . .

(5) rely on techniques to obtain attention that demonstrate a clear and intentional lack of relevance to the selection of counsel, including the portrayal of lawyers exhibiting characteristics clearly unrelated to legal competence . . .

(7) utilize a nickname, moniker, motto or trade name that implies an ability to obtain results

Applying the test from Central Hudson Gas & Electric v. Public Service Cmm'n of NY (1980), the Second Circuit first focused on whether the speech being regulated was misleading, thus making the remainder of the Central Hudson analysis unnecessary.

The court observed that the regulation (and the Bar) conflated irrelevant and misleading, and further assumed that the Bar could accurately predict what the public would find relevant.  The challengers to the regulations included the Alexander & Catalano law firm, with its motto "The Heavy Hitters" and a series of commercials available on its website. 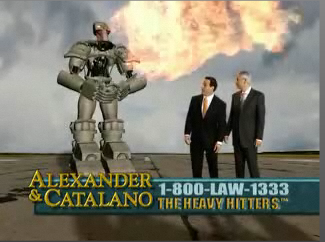 As the court stated,

the sorts of gimmicks that this rule appears designed to reach-such as Alexander & Catalano's wisps of smoke, blue electrical currents, and special effects-do not actually seem likely to mislead. It is true that Alexander and his partner are not giants towering above local buildings; they cannot run to a client's house so quickly that they appear as blurs; and they do not actually provide legal assistance to space aliens. But given the prevalence of these and other kinds of special effects in advertising and entertainment, we cannot seriously believe-purely as a matter of “common sense”-that ordinary individuals are likely to be misled into thinking that these advertisements depict true characteristics. Indeed, some of these gimmicks, while seemingly irrelevant, may actually serve “important communicative functions . . . .

The court then proceeded through the rest of the Central Hudson balancing test for commercial speech.

ConLawProfs who are (still) looking for a good commercial speech problem for an exam might take a look at the Second Circuit case.  ConLawProfs looking for materials for next semester might also take a look at the case: it's a good way to combine professional responsibility issues and the First Amendment.  And from my experience, showing some of the commercials in class is fun.

Listed below are links to weblogs that reference Supreme Court Denies Certiorari in Lawyer Advertising Case: