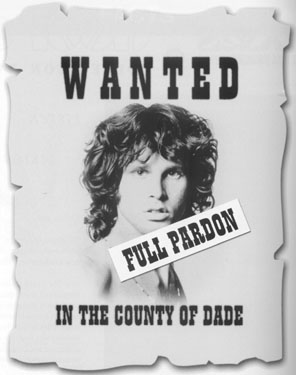 As the New York Times reports Florida's clemency board has unamiously voted to pardon Jim Morrison posthumously.  Our discussion last month of the possibility of pardon for the indecent exposure and profanity trial and possible First Amendment problems is here.

The NYT includes Governor Crist's statement, in which he states:

During the trial, some witnesses testified they saw the alleged acts for which he [Jim Morrison] was charged; however, many others testified they observed the entire concert and never saw them. In fact, so many witnesses corroborated Mr. Morrison’s testimony that the judge eventually stopped the defense from presenting any more – because their collective testimony became, what is known in legal terms as, “cumulative testimony.”

Mr. Morrison appealed his judgment and sentence; however, he died before the appeal was heard. His death prevented him from exercising his right to a direct appeal, a right given to every American by the United States Constitution. If his appeal had been heard, a reviewing court could have resolved the controversies surrounding his conviction.

Listed below are links to weblogs that reference Jim Morrison Pardoned:

Jim’s writing and lyrics have been with me since I was a teenager and influenced by own art. I drew a very surreal portrait of him for the 40th anniversary of his passing on my artist’s blog at http://dregstudiosart.blogspot.com/2011/07/celebration-of-lizard-king-jim-morrison.html Drop by and visit Jimbo AND his Shaman!