"Is it legal for a Justice of the United States Supreme Court to attend political fundraisers?"

That's the query posed by Lee Fang, a reporter at Think Progress, to Justice Samuel Alito at the American Spectator fundraiser, which Alito reportedly "headlined" in 2008. 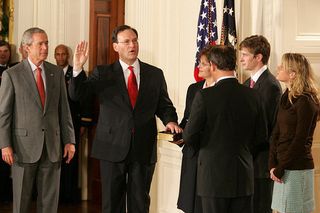 Fang at Think Progress describes The American Spectator as a "right wing magazine" that was behind the attempts to impeach Bill Clinton, that its publisher leads the “Conservative Action Project,” formed after President Obama’s election, to help lobby for conservative legislative priorities, elect Republicans and block President Obama’s judicial appointments.  The keynote speaker at last evening's event was Rep. Michele Bachmann (R-MN); her remarks are here.

On the other hand, The American Spectator describes last evening's event thusly:

Fang reports that Alito dismissed Fang's question to Alito at the event:

As Alito entered the event last night, I approached the Justice and asked him why he thought it appropriate to attend a highly political fundraiser with the chairman of the Republican Party, given Alito’s position on the court. Alito appeared baffled, and replied, “it’s not important that I’m here.” “But,” I said, “you also helped headline this same event two years ago, obviously helping to raise political money as the keynote.” Alito replied curtly, “it’s not important,” before walking away from me.

Fang's attempt to video the Justice was unsuccessful.

Judicial ethics of federal judges are governed by the Code of Conduct for United States Judges.

As John Steele (of the terrific Legal Ethics Forum blog) and Seth Barrett Tillman have pointed out, the Code of Conduct does not apply to Supreme Court Justices.

The Code of Conduct is promulgated by the Judicial Conference if the United States, and the Chief Justice of the United States is the presiding officer of the Judicial Conference.   However, by its terms, "This Code applies to United States circuit judges, district judges, Court of International Trade judges, Court of Federal Claims judges, bankruptcy judges, and magistrate judges. Certain provisions of this Code apply to special masters and commissioners as indicated in the “Compliance” section. The Tax Court, Court of Appeals for Veterans Claims, and Court of Appeals for the Armed Forces have adopted this Code."

A judge may engage in extrajudicial activities, including law-related pursuits and civic, charitable, educational, religious, social, financial, fiduciary, and governmental activities, and may speak, write, lecture, and teach on both law-related and nonlegal subjects. However, a judge should not participate in extrajudicial activities that detract from the dignity of the judge’s office, interfere with the performance of the judge’s official duties, reflect adversely on the judge’s impartiality, lead to frequent disqualification, or violate the limitations set forth below.

The limitations include subsection (c):

Fund Raising. A judge may assist nonprofit law-related, civic, charitable, educational, religious, or social organizations in planning fund-raising activities and may be listed as an officer, director, or trustee. A judge may solicit funds for such an organization from judges over whom the judge does not exercise supervisory or appellate authority and from members of the judge’s family. Otherwise, a judge should not personally participate in fund-raising activities, solicit funds for any organization, or use or permit the use of the prestige of judicial office for that purpose. A judge should not personally participate in membership solicitation if the solicitation might reasonably be perceived as coercive or is essentially a fund-raising mechanism.

Perhaps the ethical consequences turn on the question of when an "event" becomes a "fund-raising activity" or a solicitation of funds.

Or given that this rule is not strictly applicable, perhaps the ethical consequences turn on even more ambiguous - - - and unwritten - - - standards.

[image: Alito being sworn in at United States Supreme Court Justice, 2006, via]

Listed below are links to weblogs that reference Alito and Ethics :

I've often heard people say that the Code you cite does not govern SCOTUS justices, and one of the early paragraphs in the Introduction seems to suggest the same. I'm trying to find something more definitive, but what's the source for the notion that that Code does govern Justice Alito?

Think Progress calls the event a "political fundraiser," and I'm trying to nail down what that means. Was this event raising funds to be used in political campaigns?

the event in question had 2 justice i attendance

Below is the invite that went out to members and what the event was about, question would this be in violation?

It appears clear to me that the event is a political one to plan out the next election.

When you go to page 5 of the PDF you can read this.

What is at stake what is the range of possible outcomes will this be the watershed election year.

The nature of the magazine and the event was touched upon by the article and past coverage of the people involved. A taste:

It’s not the first time Alito has attended the Spectator dinner. In 2008, Alito headlined the Spectator’s annual gala, helping to raise tens of thousands of dollars for the political magazine. According to Jay Homnick, a conservative who attended the 2008 Spectator gala, Alito spent much of his speech ripping then Vice President-elect Joe Biden as a serial plagiarizer."

I'm not so what is so complicated about this. As to application, again, the article is pretty clear:

"A Supreme Court justice lending a hand to a political fundraising event would be a clear violation of the Code of Conduct for United States Judges, if it wasn’t for the fact that the nine justices have exempted themselves from much of the ethical rules governing all other federal judges. Nevertheless, a spokesperson for the Supreme Court tells ThinkProgress that “[t]he Justices look to the Code of Conduct for guidance” in determining when they may participate in fundraising activities."

The article also is clearly -- again I don't think this is complicated -- not just concerned about technical violations, but the overall message this sends and the likely chance of negative consequences, including in respect to neutrality and appearance of impropriety. Thus, the opening query about the "legality" to me misses the point. Just my .02.

I think your analysis is off. The proper inquiry is not whether the event becomes a fund-raising activity (it clearly was) or whether it was political (under the commentary to Canon 5, it clearly wasn't, and if it was, the outright bar of Canon 5 would apply).

Rather, as the Commentary to Canon 4 explains the question would be whether Justice Alito was "a speaker, a guest of honor, or featured on the program of such an event." If so, his actions were violative of the Code (whether or not the Code applies to him or not) and should be judged as such. If not, then his actions were not in violation of the code, though they may appear unseemly.