The Berkeley County Detention Center in South Carolina has an exceedingly limited book and magazine policy, according to a complaint which quotes detention center personnel as writing:

Our inmates are only allowed to receive soft back bibles in the mail directly from the publisher. They are not allowed to have magazines, newspapers, or any other type of books.

The detention centerhouses detainees for extended periods of time: with many being confined for more than sixty days, and some being confined for more than one year or two years.  The jail has no library, and also restricts mail to letters and three non-Poloroid pictures.  The Plaintiff, Prison Legal News, alleges the detention policies violate the First Amendment's Free Speech and Establishment Clauses, as well as the Due Process clause. 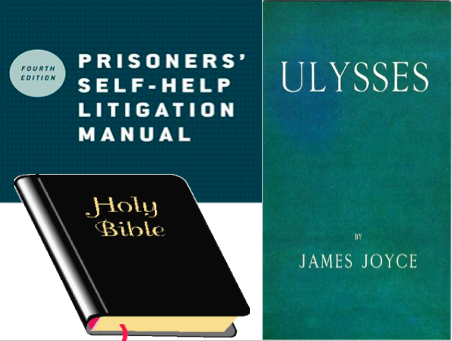 UPDATE: See comments for discussion of "postcard only" policies.

Listed below are links to weblogs that reference Only the Bible?: Prison Book Policy Challenged:

And here in California, in nearby Ventura county, there's now a "plan to limit jail inmate correspondence to postcards," part of a "growing trend around the country."