This first Monday in October, the start of a new term of the United States Supreme Court, reminds us of all the other cases the Court has decided, including the many which have achieved iconic status.  A relatively recent case in the "iconic" genre is Morse v. Frederick, 551 U.S. 393 (2007).

After all, a pretty good band (based on the music on its website) has taken its name from the case:

Bong Hits for Jesus is an eclectic mix of genres coming together in an all-out party of rock, funk, reggae and more. The name is based on a Supreme Court Free Speech case, and the band stands for freedom of speech, self-expression, and generally having a good time.

Perhaps of more interest to most ConLawProfs is a new book by James C. Foster, Bong Hits for Jesus: A Perfect Constitutional Storm in Alaska’s Capital.

Professor Foster promises an exciting tour not only of First Amendment doctrine but of the "story" behind the case and the strategies and theories of litigation - - - a real benefit when one is teaching the case.  Here's the TOC: 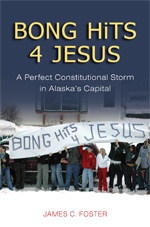 Prologue: A Tale of Three Wars and Zero Tolerance
1.   Harmonic Convergence in Juneau: [In]famous for Fifteen Minutes
2.   The Tentative Tinker Rule
3.   From Black Arm Bands to Colliding Tubas
4.   A New Century, a Different Court
5.   The Ninth Circuit Weighs In
6.   No-So-Brief Battles, Not Such Odd Bedfellows
7.   “Up in Smoke at the High Court”
8.   Five Takes on a Single Event
9.   Lost Opportunities and Failure of Imagination

Listed below are links to weblogs that reference New Book on Morse v. Frederick (the "Bong Hits 4 Jesus" case):