In the latest round of Log Cabin Republicans v. United States, in which Federal District Judge has held the military's policy regarding "homosexuality" in the military unconstitutional, Judge Phillips has issued an Order denying the Government's Request to Stay. 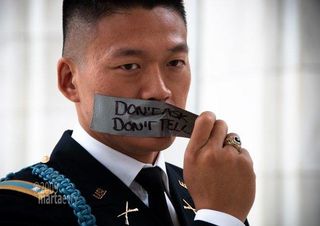 Highlights from the Judge's six page Order include an implicit admonishment to the Government attorneys:

Turning to the circumstances present here, the Court first notes Defendants had an opportunity to, but did not, present any of the evidence or arguments now advanced before the injunction issued. When the Court issued its Memorandum Opinion on September 9, 2010, it set out a briefing schedule regarding the form of the injunction. Although Defendants objected to the issuance of the injunction and its scope, they provided no evidence regarding the alleged disruption or need to revise "dozens of policies and regulations," as described in the Declaration of Clifford L. Stanley ("Stanley Declaration") . . . .  Furthermore, to the extent Defendants now submit evidence in the form of the Stanley Declaration, that evidence is conclusory and unpersuasive. It is belied by the uncontroverted evidence presented at trial regarding the Don't Ask, Don't Tell Act's effect on military readiness and unit cohesion.

On the "public interest" prong of the stay analysis, the Judge rejected the Government's argument regarding the status quo:

The Court's analysis of the public interest is not so narrow . . .  the evidence at trial showed that the Don't Ask, Don't Tell Act harms military readiness and unit cohesion, and irreparably injures servicemembers by violating their fundamental rights. The public has an interest in military readiness, unit cohesion, and the preservation of fundamental constitutional rights. While Defendants' interests in preventing the status quo and enforcing its laws are important, these interests are outweighed by the compelling public interest of safeguarding fundamental constitutional rights.

For the moment, the military's "don't ask don't tell" policy cannot be enforced.   News outlets, such as SF Chronicle, WaPo, WSJ, USA Today, and CNN report that recruiting offices are refraining from asking about sexual orientation and discharges on the basis of sexuality have ceased.

Listed below are links to weblogs that reference Judge Phillips Denies Motion to Stay Order on "Don't Ask, Don't Tell":