Florida will NOT appeal unconstitutionality of "homosexual adoption" ban

The Secretary of the Florida's Department of Families and Children has reportedly stated that it will not appeal the Florida appellate court's ruling declaring unconstitutional the state law banning "homosexuals" from adopting.

While the intermediate appellate court opinion noted that its ruling was "unlikely to be the last word," it may be.  Under Florida constitutional interpretations, the appellate court ruling would bind all courts unless and until there was another ruling.  However, the state attorney general could possibly file a notice of appeal, despite the Secretary's decision (presumably made in consultation with the governor).

However, as of today, the homosexual ban remains on the state agency's website: 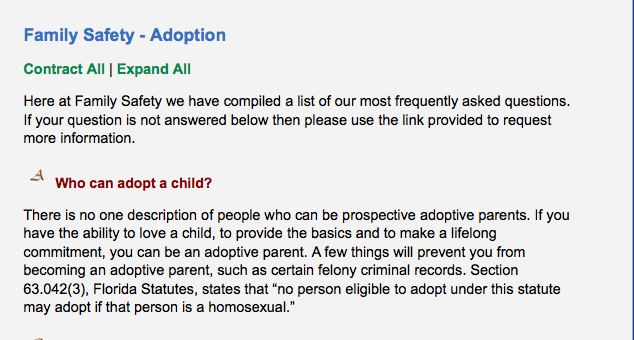 Listed below are links to weblogs that reference Florida will NOT appeal unconstitutionality of "homosexual adoption" ban: