As so-called "copycat" legislation of Arizona's SB 1070 is being contemplated by 25 other states, some provocative reporting from NPR discusses the genesis of such laws.  In part one of the report, NPR states that it "spent the past several months analyzing hundreds of pages of campaign finance reports, lobbying documents and corporate records. What they show is a quiet, behind-the-scenes effort to help draft and pass Arizona Senate Bill 1070 by an industry that stands to benefit from it: the private prison industry."  In part two, NPR continues its reporting on American Legislative Exchange Council, ALEC,and states:

Here's how it works: ALEC is a membership organization. State legislators pay $50 a year to belong. Private corporations can join, too. The tobacco company Reynolds American Inc., Exxon Mobil Corp. and drug-maker Pfizer Inc. are among the members. They pay tens of thousands of dollars a year. Tax records show that corporations collectively pay as much as $6 million a year.

With that money, the 28 people in the ALEC offices throw three annual conferences. The companies get to sit around a table and write "model bills" with the state legislators, who then take them home to their states.

Again, NPR focuses on SB1070 and similar legislation, as the NPR image below illustrates. 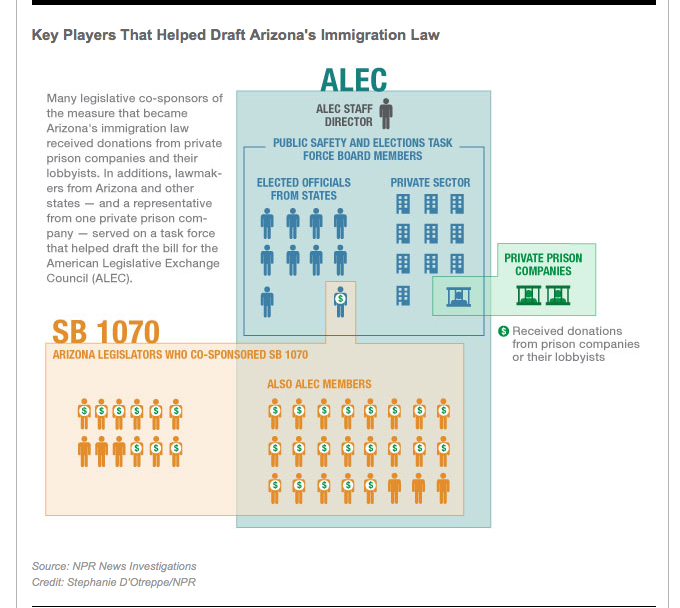 This reporting raises several constitutional issues.  First, and perhaps most obviously, are the First Amendment issues regarding lobbying, disclosure, and campaign finance, especially from the perspective of the public's "right to know."   Second, the "government interests" prong of analysis in constitutional challenges is implicated.  Might a court reject a government's proferred statement of interest in favor of an unarticulated - - - and illegitimate - - - interest such as improving business for a private corporation?

Listed below are links to weblogs that reference Arizona SB1070, Legislative Process, and Constitutional Consequences: