As we previously discussed, the suggestion to "bring back" Supreme Court Justices who have retired - - - that would be O'Connor, Souter, and Stevens - - - seems a solution to the problem of Supreme Court Justice recusals.  The recusal issue is especially pronounced this term because the newest Justice comes to the bench after having been Solictor General.

Senator Patrick Leahy has introduced a Bill which would allow such a process.  The Bill provides:

(A) any active justice is recused from that case; and

(B) a majority of active justices vote to designate and assign that retired Chief Justice or Associate Justice.’

Leahy notes that the process was suggested by then-Justice Stevens.  Currently, "Congress has previously given the Chief Justice of the Supreme Court the authority to designate and assign retired Supreme Court justices to cases in any federal circuit," as demonstrated by a recent case in which former Justice Souter wrote an opinion in the First Circuit.  But, as Leahy states, "the law does not provide any authority permitting a former justice to sit by designation on the Supreme Court – the court to which he or she was confirmed." 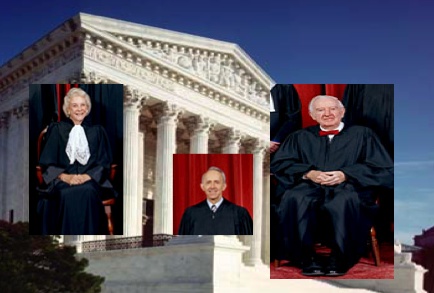 In addition to the pragmatic and political issues, the process may pose some constitutional issues as we discussed here.

Listed below are links to weblogs that reference Retired Supreme Court Justices to "Unretire"? Leahy Bill to Allow Justices to Sit by Designation:

I WOULD LIKE TO BRING TO YOUR ATTENTION TWO PROBLEMS WITH U.S. SENATOR PATRICK LEAHY.

#1 DURING YEARS OF FEDERAL LITIGATION (TWO PUBLISHED FEDERAL OPINIONS) U.S. SENATOR PATRICK LEAHY TOOK CAMPAIGN DONATIONS FROM MY OPPOSING ATTORNEYS LAW FIRM PAC, DEWEY BALLANTINE PAC, WHICH RECEIVED THE MONEY FROM MY SPECIFIC OPPOSING ATTORNEYS STUART HIRSHFIELD AND WAYNE CROSS. THESE ARE LISTED AT http://www.fec.gov
I complained to the U.S. Senate Ethics Committee and the general counsel sent me a fraudulent letter stating I hadn't proven he took the donations, which was blatant fraud because they were publicly posted at http://www.fec.gov
In the litigation the published federal court opinion from USDC Southern NY listed "chemical weapons" under statement of facts. The fourth chemical was never revealed. Federal OSHA admitted the employer exposed me to three federally regulated toxic hazardous substances, but the published federal opinion merely calls them "chemicals". These "chemicals" are PETN, lead azide and lead styphnate and they can also be used to make improvised explosive devices.

I am passionately running against U.S. Senator Patrick Leahy.

I want him OUT!

I want his SEAT!

He repeatedly took donations from my opposing attorneys and every pleading I filed was denied and dismissed.

I was a pro se litigant up against multiple megacorporations.

Now, to add abuse upon abuse:

U.S. SENATOR PATRICK LEAHY IS AN ACCOMPLICE OF VPR.
HE VOTED TO GIVE VPR TAXPAYER FUNDS, THEN AFTER
VOTING TO GIVE VERMONT PUBLIC RADIO TAX PAYER FUNDS,
HE WAS IN CONSPIRACY WITH THEM TO EXCLUDE WOMAN
CANDIDATE CRIS ERICSON FROM THE RADIO DEBATE.

PLEASE WRITE TO CRIS ERICSON AND TELL HER WHAT YOU
DO NOT LIKE ABOUT U.S. SENATOR PATRICK LEAHY.
SHE NEEDS IDEAS FOR SOUND BITES AND ONE-LINERS
BECAUSE MOST DEBATE QUESTIONS WILL ONLY ALLOW
ONE MINUTE TO ANSWER.