A Joint Resolution of Congress in 1971 designated August 26 as Women's Equality Day.  It's the date that the  Nineteenth Amendment, ratified by the requisite number of states on August 18, 1920, became effective.  the Resolution provides: 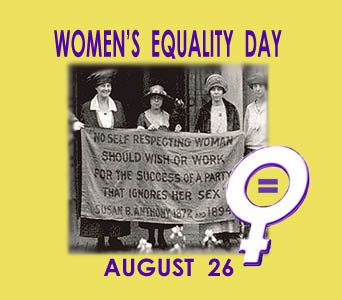 To commemorate the holiday, try this multiple choice question:

In 1971, who said, "The more education a woman has, the wider the gap between men's and women's earnings for the same work."

The correct answer is here (page 4) or here
(less well sourced but quicker).

Listed below are links to weblogs that reference Women's Equality Day:

Happy Women's Equality Day! Sadly, this day was marred with numerous negative, sexist comments on blogs, newspaper articles and facebook about how the 19th Amendment should be repealed, this blog not excluded. (See: http://lawprofessors.typepad.com/conlaw/2010/08/the-nineteenth-amendment-tennessees-ratification-ninety-years-ago-today.html#comments)

But perhaps this can make up for the lack of positive comments? http://www.glamour.com/sex-love-life/blogs/smitten/2010/08/happy-womens-equality-day.html

True, this article I just pasted is from Glamour Magazine, the same magazine that thrives off of perpetuating gender stereotypes, instructional guides on how to be more feminine and heavily contributes to negative body image. It is also not exactly what I would consider a newsworthy source, which is exactly why I posted this particular link. This article should be filed under "I'm not a feminist, but..." -- however, I'm always a bit heartened to see that, even in the mainstream women's media, readers are happy to congratulate feminist accomplishments.