Tennessee became the necessary 36th state to ratify the Nineteenth Amendment on August 18, 1920.

Congress shall have power to enforce this article by appropriate legislation.

The Amendment was made necessary by the Court's 1874 decision in Minor v. Happersett concluding that the Fourteenth Amendment did not extend citizenship rights to women.

The Amendment was first introduced in Congress in 1878, but the amendment eventually ratified by the required three-fourths of the states was introduced in 1919, with quick ratification by Illinois, Michigan, Kansas, New York and Ohio. 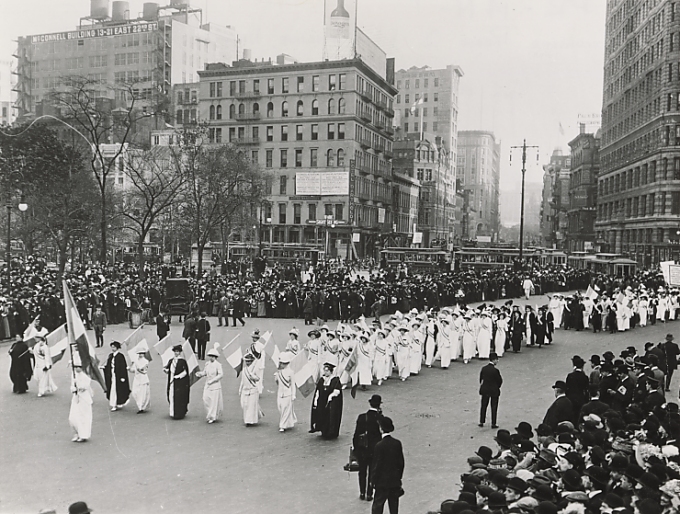 While the Nineteenth Amendment has not engendered much constitutional jurisprudence, ConLawProf Reva Siegel has argued that the Amendment could be the basis for Congressional power to address sex discrimination.  Her 2002 article, She the People: The Nineteenth Amendment, Sex Equality, Federalism, and the Family, available on ssrn, argues:

The debates over woman suffrage that began with the drafting of the Fourteenth Amendment and concluded with the ratification of the Nineteenth Amendment are plainly relevant to understanding how the guarantee of equal citizenship applies to women. At the founding and for generations thereafter, Americans believed women did not need the vote because they were represented in the state through male heads of household. By adopting the Nineteenth Amendment, Americans were breaking with traditional conceptions of the family that were rooted in coverture, as well as with understandings of federalism that placed family relations beyond the reach of the national government. The debates over the Nineteenth Amendment thus memorialize the nation's decision to repudiate traditional conceptions of the family that have shaped women's status in public as well as private law and that are inconsistent with equal citizenship in a democratic polity. If concepts of sex discrimination were informed by the experience and deliberative choices of past generations of Americans, equal protection doctrine would better recognize forms of discrimination historically directed at women; and the law of federalism would take a more critical approach to claims that the family is a local institution, beyond the reach of the national government.

Perhaps a robust Nineteenth Amendment jurisprudence is yet to come?

Listed below are links to weblogs that reference The Nineteenth Amendment: Tennessee's Ratification Ninety Years Ago Today:

And within a couple of years; prohibition.

If the Republic wasn't destroyed by the War of Northern Aggression, this, certainly was its final straw.

Life was sweeter before the 19th.

Minor didn't say that women didn't get citizenship rights, but that the 14A didn't confer voting rights on anyone. See http://ssrn.com/abstract=1658010 at 63-64.

The 19th Amendment is a right to own property and have direction over your own life, as per: 'life, liberty, and the pursuit of happiness', perhaps purloined by Thomas Jefferson from John Locke's 'life, liberty, and property', aka "Capitalism" the ownership of one's self; the opposite of "Socialism" where the State owns everybody and their property. Much is made of the 'vote' here but in actuality it's secondary or ancillary to the right to own property and have direction over their own life as human beings.

The 19th Amendment should be repealed. All it has resulted in is misandry in big government institutions. Women will always vote for Big Brother as a "provider" in order so that the state subsidizes their hypergamous behavior.

Didn't the Tennessee legislator whose vote in the statehouse put the ratification resolution over the top do it because his mommy told him to?

Washington Post columnist Alexandra Petri has a satirical discussion about repealing the 19th A here:

"Minor didn't say that women didn't get citizenship rights, but that the 14A didn't confer voting rights on anyone."

THANK YOU! That first glaring bit of hyperbole in the article actually caused me to READ the linked ruling, where the Court went rather out of it's way to confirm the Citizenship of the plaintiff as not only being obvious, but not even requiring the 14th Amd. to do so.

A very important bit of the ruling is at the end:

"We have given this case the careful consideration its importance demands. If the law is wrong, it ought to be changed; but the power for that is not with us."

Sometimes courts make (and should) unpopular decisions merely because legislating is not their power or duty - considering arguments in the light of existing legislation is all they should do. The Minor ruling actually implies sympathy with the plaintiff, and barely restrains itself from exhorting Congress to change the law. To characterize the ruling as "concluding that the Fourteenth Amendment did not extend citizenship rights to women" is grossly unfair and/or disingenuous.

Frankly, I'd expected better of a blog in this venue. I'm a tad disappointed in this article's tone.