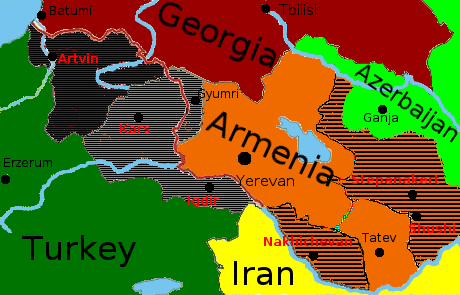 The political heart of the case is the contentious issue of whether an Armenian genocide occurred, with the Republic of Turkey (as successor to the Ottoman Empire) vigorously arguing against such an interpretation of the post World War I events.  Several months ago, a Congressional committee condemned the genocide, causing a swift reaction by Turkey.

Given such debates, it is not surprising that a state "curriculum guide" addressing the subject would also be contentious.  The legal issue before the First Circuit, as stated by Justice Souter, was "whether a decision by the Commissioner of Elementary and Secondary Education of Massachusetts to revise an advisory “curriculum guide” (by deleting his own earlier revision) in response to political pressure violated the First Amendment."   The court affirmed the district judge's holding that there was no First Amendment violation.

While disputes about the Armenian genocide may be the political heart of the case, the doctrinal core is the equally fraught status of the "curriculum guide."   Souter writes:

The briefing and argument have urged two competing metaphors upon us, with contrasting constitutional implications: that the Guide is a virtual school library established for the benefit of students as well as teachers; and its contrary, that the Guide is an element of the curriculum itself.

(Opinion at 7).  The library "metaphor" would subject the "decision to remove the references to contra-genocide material to First Amendment review" under the 1982 plurality decision of Pico.  Souter's opinion distinguishes Pico on several grounds, including the more correct categorization of the "curriculum guide" as curriculum rather than a library book. The opinion also reasons that even if the guide were considered more library book than not, the "missing step is the decisive act by a superior official overruling the authority that determines content in the normal course (in this case, the Board)."  In other words, the challenged revisions to the "curriculum guide" omitting the "contra-genocide" references were made by the same authority that had included the references in the first place.  (Opinion at 10).

Souter's opinion concludes that "the revisions to the Guide after its submission to legislative officials, even if made in response to political pressure, did not implicate the First Amendment." (Opinion at 15).

Listed below are links to weblogs that reference Justice Souter's New Opinion on Free Speech, Schools, and the Armenian Genocide: