Adopted by the Continental Congress on July 4, 1776, the Declaration of Independence is the foundational text for the July Fourth "Independence Day" national holiday in the United States. Among the discussions of the document this year, two stand out.

First, there is the colloquy between Senator Charles Grassley (R-Iowa) on Day Two of the Kagan Confirmation hearings, in which Grassley invokes the Declaration of Independence to raise the issue of Kagan's views on the Second Amendment and the Court's interpretation in Heller and McDonald:

GRASSLEY: Well, it’s basic to our Declaration of Independence that says we’re endowed by our creator with certain -- certain individual rights, among them, you know, what it says, and we aren’t endowed by our government. So the question here is, are we endowed by our Constitution with this right or did it exist before the Constitution existed?
KAGAN: Well, Senator Grassley, I do think that my responsibility would be to apply the
Constitution as understood and previously applied by the court, and that means as understood and -- and interpreted by the court in Heller, and that’s what I would do. So I think that the -- the fundamental legal question would be whether -- that a case would present would be whether the Constitution guarantees an individual right to bear arms, and Heller held that it did, and that’s good precedent going forward.
GRASSLEY: I know the Declaration of Independence is not the law of the land, but it does express a philosophy of why we went to war and why our country exists. And you understand, I hope, that if we’re endowed by our government with certain rights, the government can take them away from us, whereas if we possess them ourselves and give them up from time to time to the government to exercise in our stead, then the government can’t take away something that’s inherently ours.
Do you believe that the Second Amendment right to bear arms is a fundamental right?
KAGAN: Senator Grassley, I think that that’s what the court held in McDonald.
GRASSLEY: And you agree with it?
KAGAN: Good precedent going forward.

Second, there is the feature from the New York Times, "Thoughts on a Declaration," in which the editors asked contributors to The Stone, “What is the philosophical theme, or themes, in the Declaration of Independence that should be recalled in today’s America?”   The responses from philosophers Arthur C. Danto, Todd May, and J.M. Bernstein are then provided.   While Todd May writes movingly of equality focusing on undocumented workers and Bernstein invokes Janis Joplin, the selection of three white male philosophers to answer a query about "today's America" is a rather startling statement. 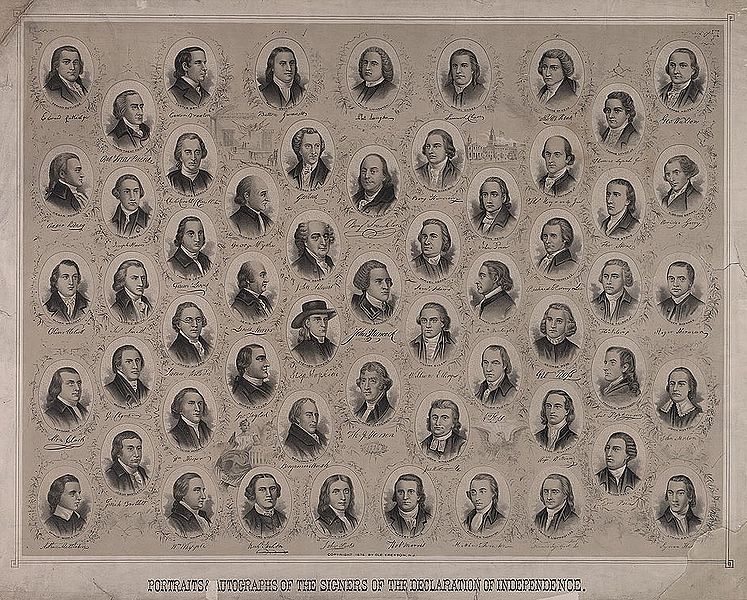 [image: portraits and autographs of the signers of the Declaration of Independence, via]

The Declaration of Independence may have been exclusively signed by white men, but as we interpret the document's philosophical relevance, is this exclusivity "good precedent going forward"?

Listed below are links to weblogs that reference Declaration of Independence Thoughts: Kagan Hearing and (White Male) Philosophers: