Judge Ronald Whyte of the District Court of Northern District of California has dismissed the indictments against Joseph Buddenberg and three other defendants under AETA, the Animal Enterprise Terrorism Act, 18 USC 43.  The pertinent parts of AETA provide:

(a) Offense.-Whoever travels in interstate or foreign commerce, or uses or causes to be used the mail or any facility of interstate or foreign commerce-
(1) for the purpose of damaging or interfering with the operations of an animal enterprise; and
(2) in connection with such purpose-
(A) intentionally damages or causes the loss of any real or personal property (including animals or records) used by an animal enterprise, or any real or personal property of a person or entity having a connection to, relationship with, or transactions with an animal enterprise; or
(B) intentionally places a person in reasonable fear of the death of, or serious bodily injury to that person, a member of the immediate family (as defined in section 115) of that person, or a spouse or intimate partner of that person by a course of conduct involving threats, acts of vandalism, property damage, criminal trespass, harassment, or intimidation; or
(C) conspires or attempts to do so;
shall be punished as provided for in subsection (b). 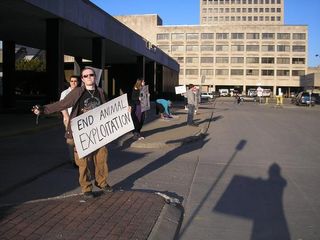 be construed"(1) to prohibit any expressive conduct (including peaceful picketing or other peaceful demonstration) protected from legal prohibition by the First Amendment to the Constitution;  (2) to create new remedies for interference with activities protected by the free speech or free exercise clauses of the First Amendment to the Constitution, regardless of the point of view expressed, or to limit any existing legal remedies for such interference . . . . "

Judge Whyte previously denied a motion to dismiss the indictments based on the unconstitutionality of AETA as overbroad and vague.   In the new ruling, the Judge dismisses the indictments without prejudice on the basis that the indictments failed to allege sufficient facts under the Fifth Amendment.  Yet as the Judge notes, the indictment basically tracks the language of the statute.  The underlying problem is whether the alleged facts (and ultimately the facts that can be proven at trial) will be sufficient to fall within the offense and not be protected by the First Amendment.

The four defendants are all California young adults, Joseph Buddenberg, 25, Adriana Stumpo, 23, Nathan Pope, 26,  and Maryam Khajavi, 20, who have engaged in animal rights activism.  With others, they have protested at the homes of professors who engage in animal research.  They were also linked to fliers found at the  Café Pergolesi in Santa Cruz, entitled "Murderers and torturers alive & well in Santa Cruz July 2008 edition" which listed the names, addresses, and telephone numbers of several University of California researchers and stated “animal abusers everywhere beware we know where you live we know where you work we will never back down until you end your abuse.”

The case has attracted much attention.  The defendants are being represented by the Center for Constitutional Rights.  The New York City Bar has urged the repeal of AETA, discussing the Buddenberg indictments as demonstrating the statute's overbreadth under the First Amendment and shows "AETA’s misapplication of “terrorism” to animal rights protest activity."

It also makes a terrific class exercise, exam problem, or both.  Last semester I used the case in First Amendment class as we discussed doctrines regarding "threat" and "political speech."

(with thanks for the tip to Natasha Bannan, 3L, CUNY School of Law).

[image of anonymous protester via]