In a speech at the American Constitution Society National Convention, Senator Al Franken sharply criticized the Roberts Court and the Federalist Society. 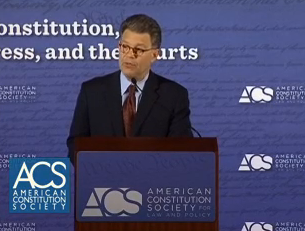 Franken's remarks are available in transcript; audio; and video at the ACS website.

While Franken acknowledges he is "one of the few non-lawyers in the room," and not an academic,  he nevertheless delves into constitutional theory and recent cases to support his point that the Court's decisions matter to "ordinary people."   He disavows originalism by linking it with Robert Bork and ultimately concludes: "Originalism isn't a pillar of our Constitutional history.  It's a talking point."  He critiques Roberts' "judges as umpires" metaphor with reference to a case by the Louisiana Supreme Court in 1866.  He discusses cases such as Lochner and Citizens United, but also Stoneridge, Conkright, Leegin, Iqbal, Exxon, Rapanos, Circuit City, and Ledbetter.  He also mentions recent proposals to "prioritize" internet service and how that might impact the flow of information.

For those teaching summer school - - - perhaps a comparative constitutional law course outside of the States?? or a legal theory course for non-law students?? - - - this could be the foundation of a good class exercise.  One could assign students to write a response or to select one of Franken's points and fully support it.

Listed below are links to weblogs that reference Al Franken at American Constitution Society National Convention: