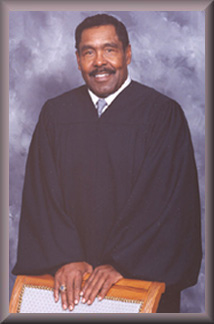 A state constitutional conflict is brewing in New Jersey over Governor Chris Christie's non-"reappointment" of John Wallace, the only African-American of the seven state justices on the New Jersey Supreme Court. Justice Wallace (pictured right) was appointed in 2003 and his seven year term expires May 20, 2010.

Christie has been quoted as criticizing the court for its activism:

“The court over the course of the last three decades has gotten out of control,” Christie said during a press conference in Trenton. “It inappropriately invaded the executive and legislative constitutional functions. It’s not for the court to set some of the policies that I believe that they’ve set. And I’ve talked all during the campaign about changing the court. The only way to change the court is to change its members.”

Christie seemingly has the power to change the court's members under the NJ state constitution:   Article VI, Section VI, paragraph 3 provides that the Justices of the NJ Supreme Court "shall hold their offices for initial terms of 7 years and upon reappointment shall hold their offices during good behavior" and "shall be retired upon attaining the age of 70 years."

The nonreappointment of a Justice on the expiration of the seven year term is unprecedented according to quoted NJ legislators,  NorthJersey.com news, and the NYT.

Wallace would have faced mandatory retirement in 22 months, but Christie chose to remove him from the bench in favor of nominating Anne Patterson, a 51 year old white woman, insurance defense attorney, and Republican contributor.

The appointment of Patterson may be difficult; A state senator is reportedly intending to block the confirmation hearing of Patterson.

Listed below are links to weblogs that reference New Jersey Supreme Court under Governor Chris Christie:

Elections have consequences. Governor Christie ran on, among other things, changing the composition of the court so that it would be less activist. Decisions such as Abbott, Mount Laurel and the death penalty cases were legislating from the bench. The court took on responsibilites normally reserved to the legislature. By doing this, the court exposed itself to the political winds. I support his decision and hope the court returns to its proper role.