In a 7-2  opinion, the Court this morning decided United States v. Comstock, argued in January (our discussion here).  The Court reversed the Fourth Circuit and upheld the constitutionality of a Congressional statute, 18 U. S. C. § 4248, allowing the order of civil commitment for a federal prisoner who is a sex offender, even if the commitment continues beyond the date the inmate otherwise would be released.

The question presented was whether the statute was within Congressional power under the Necessary and Proper Clause, Art. I, § 8, cl. 18.

In a well-structured opinion, written by Justice Breyer (pictured right) 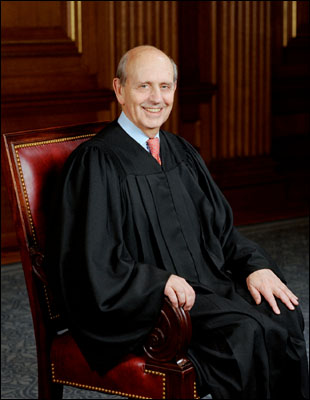 the Court provided five bases for its opinion, which "taken together" justified the Court's conclusion:

As to the fifth reason, Breyer does not cite a specific enumerated power to which the necessary and proper clause "links."  This lack provides much of the substance of Thomas' lengthy dissenting opinion:

The Government identifies no specific enumerated power or powers as a constitutional predicate for § 4248, and none are readily discernable. Indeed, not even the Commerce Clause—the enumerated power this Court has interpreted most expansively, [citation omitted] can justify federal civil detention of sex offenders.  Under the Court’s precedents, Congress may not regulate noneconomic activity (such as sexual violence) based solely on the effect such activity may have, in individual cases or in the aggregate, on interstate commerce. Morrison, 529 U. S., at 617–618; United States v. Lopez, 514 U. S. 549, 563–567 (1995).

Thomas also takes issue with the majority's dismissal of any Tenth Amendment problem, arguing that the federal statute "closely resembles the involuntary civil-commitment laws that States have enacted under their parens patriae and general police powers. "

Breyer's opinion for the Court bracketed any due process concerns, citing Kansas v. Hendricks, 521 U. S. 346 (1997).  However, there is an obvious connection between the Court's narrow reading of due process in Hendricks and the expansive reading of the Necessary and Proper Clause in Comstock. Indeed, the Court seems keen to uphold laws regulating so-called  "sex offenders."

Listed below are links to weblogs that reference Necessary and Proper to Extend Civil Committment for Sex Offenders: Comstock Opinion Analysis:

Talk about a decision that makes me nervous in a million ways. As a parent, the sex offender thing always gives me concern. As an American and student of the law, locking up people after they have served their sentence does the same.

That said, I prefer chemical castration, which some see as even more egregious, but at least there is some medicinal aspect to that.

I just can't help but think where this could potentially lead. Serial killers. Serial rapists. Should they also be included in this category?

What happens when the state says, yes, you have served your sentence, but you are still a threat, so you can be detained indefinitely until we decide otherwise?

This decision just makes me very uncomfortable. It throws rehabilitation totally out the window.