Today's oral argument at the United States Supreme Court in Doe v. Reed (transcript here) revealed some skepticism about the claim that signing a petition should be protected by the First Amendment in order to avoid harassment.

The background facts can be a bit confusing.  In 2009, the Washington legislature passed SB 5688, expanding nearly all state-wide spousal rights and responsibilities to registered domestic partners, and commonly known as the “everything but marriage” law.   Opponents of the legislation sought to negate SB 5688 through a ballot initiative, Referendum 71.   Under Washington law, like most states that allow voter-initiated referendums, the process requires a certain number of valid signatures on petitions supporting the ballot initiative process.  The Secretary of State certified the Referendum for the November 2009 election with approximately 1,000 signatures to spare and an almost 12% error rate (signatures rejected) and prepared the ballot summary: A YES vote on Referendum 71 APPROVED SB 5688 expanding domestic partnership. Referendum 71 passed and SB 5688 became law. 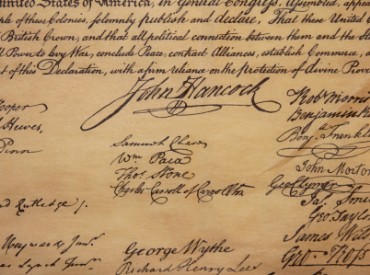 What is at issue in Doe v. Reed, however, is the disclosure of the signatures on the petitions.

The Washington Public Records Act (PRA),  RCW 42.56, governs the disclosure of public records.  The state contends that the petitions with signatures are public records that need to be certified before the referendum can be placed on the ballot, and also contends that the signature gathering was done in public places and presented to the Secretary of State in a public forum.  The challengers to PRA, the "Does" and Protect Marriage.org contend that the disclosure of the signatures violates the First Amendment: the signing of a petition is core political speech subject to strict scrutiny and that the state's interests in disclosure are not compelling.  One issue is what, if anything, does the signature mean?  During oral argument there was some discussion that a signature on a petition supports placing the issue before the voters and does not necessarily mean anything about the desired outcome, but there seemed to be little disagreement that there was a very strong correlation.

The challengers heavily rely upon the threat of intimidation, discussing in their briefs events surrounding California's Proposition 8.  Court watchers will also recall that the Supreme Court refused to allow the televising of the Proposition 8 trial in federal court; an opinion from the trial judge is still pending. Indeed, at times during the oral argument, members of the Court seemed to believe that the case arose in California rather than Washington.  However, there seemed to be little evidence in the record about intimidation in Washington and some procedural reasons why none was presented.   Moreover, this might be better suited to an as-applied challenge to the statute rather than a facial one:  "This Court ruled as recently as Citizens United that such situations should be evaluated on a case-by-case basis to evaluate the reasonable probability of threats, harassments, and reprisals,"  answered the Attorney general of Washington in response to a question from Justice Breyer.

Arguing for the Does and Protectmarriage.org, James Bopp began : "No person should suffer harassment for participating in our political system, and the First Amendment protects citizens from intimidation resulting from compelled disclosure of their identity and beliefs and their private associations."

He was quickly interrupted by Justice Scalia who inquired about the analogy to campaign contributions, with Bopp agreeing and citing Buckley v. Valeo and Scalia asking why that doesn't fall within Bopp's principle that no person should be exposed to criticism for his political beliefs.  Indeed, Scalia expressed much skepticism regarding Bopp's argument:

the fact is that running a democracy takes a certain amount of civic courage. And the First Amendment does not protect you from criticism or even nasty phone calls when you exercise your political rights to legislate, or to take part in the legislative process.You are asking us to enter into a whole new field where we have never gone before.

Scalia later derided the "touchy-feely, oh, so sensitive" sentiments, concluding that "you can't run a democracy this way, with everybody being afraid of having his political positions known."

Justice Ginsburg inquired about the list of signatures as available to the organization, noting that the signatures on the petition could be used for marketing purposes, to which Mr. Bopp agreed.

There was also a bit of a rebuke from Justice Kennedy:

JUSTICE KENNEDY: Well, let me -- let me ask you, could the opponents of a particular ballot measure organize a boycott for -- and picket businesses whose managers had supported that boycott.
MR. BOPP: Yes.
JUSTICE KENNEDY: Had supported that initiative?
MR. BOPP: Yes.
JUSTICE KENNEDY: Well, if that's -- if that's so, then under Claiborne Hardware, which I -- I notice you didn't cite in your brief, but if -- if that's so, then it seems to me that the State's -- or that -- that the signers' interest in keeping their names private is somewhat diminished.

In addition to the fraud rationale for requiring disclosure, Justice Stevens posed a public debate rationale:

Justice Alito, questioning Robert McKenna who argued for the State of Washington, seemed to accept the state's interest in preventing fraud, but pushed vigorously against the public interest in knowing who is supporting the election:

JUSTICE ALITO: Well, but how far does that go? When I asked whether you could -- you want to know the religion of the people who signed? No, you can't do that. How much more demographic information could be collect -- could be -- does the -- does the State of Washington have an interest in making publicly available about the people who support this election?  Let's say it's -- it's a referendum about immigration. Does the State of Washington have an interest in providing information to somebody who says, I want to know how many people with Hispanic names signed this, or how many people with Asian names signed this? Is that -- that what you want to facilitate?

Before oral argument, it seemed to be easy to think about the signatures on the petitions by analogy:  Is the signature more like a legislative act, with little if any First Amendment protection given the countervailing interests of  open government.   Or more like an act of voting, with more First Amendment protection.  But during oral argument, this dichotomy broke down, especially given the historical appeals to secret voting as a recent development and not uniform in the United States.

If the opinion reflects the oral argument, the state of Washington will most likely prevail.

Listed below are links to weblogs that reference Doe v. Reed, The Right to Remain Anonymous when Signing a Ballot Initiative: Oral Argument Analysis:

This case seems easily in the state's favor from my viewpoint. Two points:

First, the signatures must be certified by a government or government-affiliated agency. The public therefore shares an oversight interest in making sure that this agency is acting in good faith.

What would happen if those who certified the signatures were somehow acting in concert with the petitioners? This is why public records are made so, as a public oversight on their elected officials.

Second, if a referendum is so egregious that opponents would be inflamed to harassment, perhaps that bill should require a bit of second thought on the part of signers.

That said, I think there is a case to be made that this decision would cause citizens to fear advocating a political position thereby limiting speech. However, we have laws against harassment. So protection on this front already exists.

Finally, is the threat of harassment even credible? I recall during the Prop 8 discussion it was argued that perhaps roving mobs of gay people with torches and pitchforks would take to the streets in pursuit of proponents. Totally silly and of course never happened.

Okay, I went beyond two points. My verbosity apparently knows no bounds.

Justice Breyer asked an important question, wanting to know what the Constitution requires in the case of citizens wanting to put a measure on the ballot to reopen a school in Alabama to fight segregation, in the face of threats of bombing and homicide. But I think General McKenna answered it incorrectly. The answer is not, I think, that some legislation should be accomplished in secret. Recall that the federal constitution protects anonymous advocacy, as the Court held in McIntyre v Ohio. Recall that voting at the ballot box is secret under the state constitution. If proponents can secretly sponsor legislation, which they can anonymously promote and anonymously vote into law, that does not bode well in the longer term for the minority that is under threat. No, I think the answer to Justice Breyer is that when you have a complete breakdown of civic order, as was the case in Alabama in the 60's, you have to address it the way President Johnson did: you restore order and suppress the threats of violence by sending in the National Guard. Justice Scalia was right: there is no way, none, that the progess that has been made in every step toward liberty in the history of this great country could have been achieved in secret, without courage. To consider Justice Breyer's example, desegregation, it could not have succeeded in secret, or without the extraordinary courage of Americans like Dr. King, Rosa Parks, the marchers in Selma, the civil rights volunteers (some of whom were murdered) and Ruby Bridges, the little girl who was pictured walking to the school door protected by a phalanx of U.S. Marshalls from the hatred of the crowd. Think of her, for a moment: black children were not going to be able to go in secret to desegregated schools; someone was going to have to be the first to go. Imagine the courage of that little girl, that of her parents who must have suffered terrible fears, and yes, that of the Marshalls who kept her safe. Her public act inspired the good, and shamed the haters. Imagine, by contrast, if the Klan had been able to claim a constitutional right not only to conduct their meetings in their hoods, but to propound legislation in them, and vote, with no right in the public to see who was behind the laws they promoted? No, secrecy might have protected desegregationists in the short term, but over the longer term the minority for whom they spoke up would have been worse off.

Hundreds of petitions have been signed by voters in Washington State over the years with no opposition group demanding the names of the petition signers be released until this case.

One must ask why.

The simple answer is the wealthy homosexual advocacy groups are determined to silence all opposition to homosexuality through the force of law.

And the ugly reality is these groups have used intimindation and coercion as well as violence against their opponents. Petition signers in this case had a valid fear that exposing their names publicly would open them up to violence.

Yes, Elaine, but what do you make of Scalia's argument in his concurring opinion:

"Plaintiffs raise concerns that the disclosure of petition
signatures may lead to threats and intimidation. Of
course nothing prevents the people of Washington from
keeping petition signatures secret to avoid that—just as
nothing prevented the States from moving to the secret
ballot. But there is no constitutional basis for this Court
to impose that course upon the States—or to insist (as
today’s opinion does) that it can only be avoided by the
demonstration of a “sufficiently important governmental
interest,” ante, at 7 (internal quotation marks omitted).
And it may even be a bad idea to keep petition signatures
secret. There are laws against threats and intimidation;
and harsh criticism, short of unlawful action, is a price our
people have traditionally been willing to pay for selfgovernance."