Denny Chin (and other) Nominations for Federal Court Judgeships 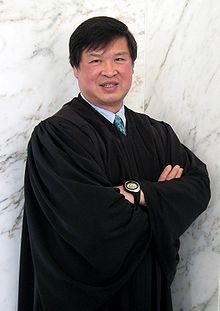 presently a United States District Judge for the Southern District of New York and well-known outside the district for presiding over the Bernie Madoff trial, was nominated for the Second Circuit by President Obama last October.   The nomination is one of over 100 vacancies on the federal courts, according to Alliance for Justice, whose most recent report, The State of the Judiciary: The Obama Administration 2009 (available here)  issued earlier this month lists Chin amongst the pending nominations, noting that Chin's judiciary committee hearing was on November 18, was reported out of committee on December 10, 2009 by a unanimous voice vote and that a confirmation vote on his nomination has not yet been scheduled.   The Alliance for Justice report also discusses the nomination process for now-Justice Sotomayor.

Sotomayor's nomination process certainly deflected attention from the "lower court" judicial appointments.  As BLT reports, "Last year, not a single Obama judicial nominee was confirmed while the Senate spent months on the vacancy created by Justice David Souter's retirement. This year, Democrats say they are determined not to let the same thing happen because of Justice John Paul Stevens' decision to step down."   Politico reports that "Democrats are likely to start with noncontroversial nominations" such as that of "Denny Chin, who was sent to the Senate floor with unanimous consent from the Judiciary Committee in December but has yet to be confirmed," and noting that "Chin would become the only Asian American to serve on an appellate bench."   Another Asian-American nominee to the Court of Appeals, Goodwin Liu is proving more controversial.

Listed below are links to weblogs that reference Denny Chin (and other) Nominations for Federal Court Judgeships: