A lawsuit challenging the constitutionality of Arizona's new immigration law SB1070 has been filed today in the United States District Court for the District of Arizona.  The  Complaint alleges violations of

The plaintiff, Martin Escobar, alleges he is "Hispanic" and "is employed as a permanent Police Officer with the City of Tucson for the Tucson Police Department." 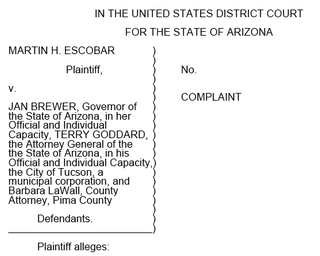 Listed below are links to weblogs that reference Complaint Challenging Constitutionality of Arizona Immigration Law SB 1070:

I am really keen to see how the Escobar v. State of Arizone case plays out as a friend of mine is working on a similar case in Texas. Any idea when the court case will take place.

is it contitutional or not? that's all i want to know

This is strictly piling on to confound the issue and delay the implementation of the law until after the election and also delay additional states from passing similar laws.

Pre-emption doesnt apply because Arizona is not pre-empting Federal law
they are parroting it. Every State has a right to make and enforce laws that protect citizens of their State, including removing individuals that may be unlawfully present by either State or Federal laws that apply...

This lawsuit needs to be fast tracked to the Supreme Court because its critical for the upcoming elections. You can bet the DOJ will find every means possible to delay transition of the case to the Supreme COurt until after the election