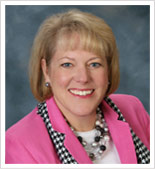 energized by Obama's "hard-left agenda" and has launched LibertyCentral to "serve the big tent of the conservative movement."

As Kathleen Hennessey for the LATimes notes:

The move by Virginia Thomas, 52, into the front lines of politics stands in marked contrast to the rarefied culture of the nation's highest court, which normally prizes the appearance of nonpartisanship and a distance from the fisticuffs of the politics of the day.

Justice Thomas, 61, recently expressed sensitivity to such concerns, telling law students in Florida that he doesn't attend the State of the Union because it is "so partisan."

Although Virginia Thomas has long been associated with conservative causes, including working at the Heritage Foundation, this launch of "a tea-party-linked group" is one that "could test the traditional notions of political impartiality for the court."

It could also test our notions of what judicial spouses should - - - and shouldn't - - - be doing politically and professionally.

Listed below are links to weblogs that reference Justice Thomas' Wife and Tea Party Activism :

The average citizen cannot get at its rights.
And they know. ‘’money talks justice walks’’ in too many avenues of law to list here.
If 50% of citizens in any government do not get involved in that government it is because of that knowledge.
Of course the Masses have always held the power, but personal fear of the ‘Money holders’ long reach
And a real understanding that most of the ‘masses’ will hide, prevents involvement.
A sad commentary but the way it has always been in human societies.
carol.