Within ten minutes of President Obama’s signing of the Patient Protection and Affordable Care Act, available as large download here, thirteen states through their state attorney generals filed a complaint in the Northern District of Florida, Pensacola Division, challenging the constitutionality of the statute. 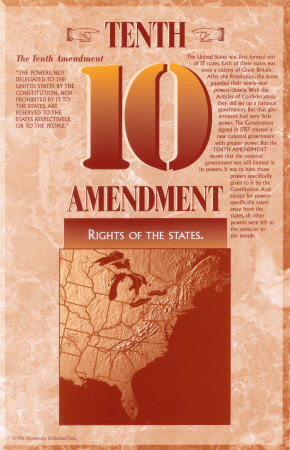 Count One, entitled “Unconstitutional Exercise of Federal Power and Violation of The Tenth Amendment (Const. Art. I & Amend. X)”  alleges both that the Act exceeds Congressional power under Art I sec 8; the “taxing and Spending Clause”; or “any other provision of the Constitution” (para 56), and that the Act violates the Tenth Amendment.

Count Two, entitled “Violation of Constitutional Prohibition of Unapportioned Capitation or Direct Tax
(Const. Art. I, §§ 2, 9)” alleges that the tax penalty on uninsured persons “constitutes a capitation and a direct tax that is not apportioned among the states.”

The Act is directed to a lack of or failure to engage in activity that is driven by the choices of individual Americans. Such inactivity by its nature cannot be deemed to be in commerce or to have any substantial effect on commerce, whether interstate or otherwise. As a result, the Act cannot be upheld under the Commerce Clause, Const. art. I, § 8. The Act infringes upon Plaintiffs’ interests in protecting the freedom, public health, and welfare of their citizens and their state fiscs, by coercing many persons to enroll in Medicaid at a substantial cost to Plaintiffs; and denies Plaintiffs their sovereign ability to confer rights upon their citizens and residents to make healthcare decisions without government interference, including the decision not to participate in any healthcare insurance program or scheme, in violation of the Tenth Amendment (para 65).

The fourth and final count seeks declaratory judgment based on the previous allegations.

For pedagogical purposes, the Complaint could be used as an in class exercise in a Constitutional Law course, perhaps using some of the materials available from the Federalist Society here to write a memo in support of the complaint, as well our previous discussions here and here.  It might also be useful for a Constitutional Litigation seminar to engage in a redrafting of the Complaint or a drafting of an Answer.

Listed below are links to weblogs that reference Constitutional Challenge to Health Care Mandate: Complaint :

I would propose that we need to get deeper than a literal analysis of the Constitution. What's at stake here are the principles on which the Constitution and American society itself are founded. The issues relate to our vision and deepest feelings as Americans. I'm sure we could invoke any number of experts to attest to the principle that there is a 'spirit' as well as a 'letter' to the law, and that both must be taken into account in an assessment of constitutionality. Forcing people to buy insurance is a truly radical step, a division point in history of the concepts of society, the social contract, and the relationship of the individual to the state.

Note that healtchare today is more than a fixed, universally accepted set of theories and practices. A lot goes on in the field that I, for example, as a health professional (and a consumer) find appalling, scandalous, unscientific, and unfair. Even if we concede a valid constitutional authority of the federal government make us buy insurance, would that theoretical power also extend to requiring the purchase of overpriced and mismanaged insurance?

And how does one take into account various complex issues that relate to personal values, religion, and spirituality? Some religious groups do not believe in medical treatment. And there are related issues concerningr allocation of resources. Is it fair to divert excessive money too artificially prolong the life of a person bedridden and with advanced Alzheimer's disease instead of helping a young family? Is any government bureacracy equipped to make such decisions?

And yet a deeper issue: At what point do we confront the irrational fear of death that drives the health industry? In some societies, and for some religious people in American, death is not so much to be feared as anticipated. We have today the dominance of a single philosophy, one of many possible ones, concerning the relationship of life and death. Should every detail in society be driven by this one possible philosophy? Is it right to make ourselves miserable, working ourselves sick to afford insurance, for the sake of "health"?

I just wanted to say thank you for this. To some of us, our spirituality and our healthcare are one and the same and this socialist law is an extreme violation of our constitutional rights. It clearly states that we have the right to freedom of religion and the right to life, LIBERTY and the pursuit of happiness.

I would like to know the President and the government in generals intention pertaining to healthcare reform as well as many other topics. If this law was inacted to help citizens then I can see that, however I still things it's wrong. I'm not sure if the government did this with money making in mind or not, I would hope not, but I'm realistic to know that that's definetly a possibility. To force people that are prevented be their religions to seek medical treatments in any form is crazy, they could use that money to do something else for them health insurance is something that they will never under any circumstrances use. So where is the justice in that?