Should United States courts cite to non-US constitutional (or other) decisions?


To many judges in national courts, faced with cases for decision involving the meaning of their own constitutional charters of rights, it has often seemed appropriate and useful, over recent years, to reach for the exposition of analogous problems written by judges and decision-makers in the courts of other countries, in international or regional courts and other bodies, grappling with similar problems. Doing so has not generally been viewed as evidencing any illegitimate loyalty, or deference, to nonbinding texts. Still less has it been seen as exhibiting obedience to the legal norms of other countries or the international community, or to the opinions of judges and others outside the legitimacy of the municipal court hierarchy. Instead, reference to such elaborations has occurred because such expositions have been found helpful and informative and therefore useful in the development of the municipal decision-maker’s own opinions concerning apparently similar problems presented by the municipal constitution or other laws.

None of the foregoing statements would be regarded as strongly contestable or even controversial in any common-law country, or indeed in most civil-law countries, save for the United States of America and Australia.

In the Donahue Lecture at Suffolk University Law School, Justice Michael Kirby, recently retired from Australia's High Court (under its mandatory retirement policy), compellingly compares the Australian and US experiences with foreign and international law. 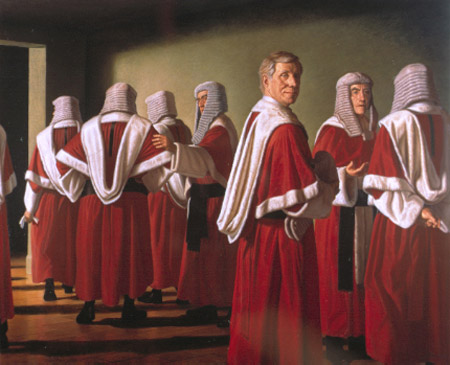 Kirby (depicted in an Australian government portrait above) argues that domestic (or as he often says, "municipal") jurists realize that "decisions of foreign courts, tribunals and other bodies and the content of international and regional law, outside one’s own legal system, are not studied because they provide a binding rule that governs a municipal case and determines its outcome."  Instead, he notes that these decisions offer "a contextual setting that helps the municipal decision-maker to see his or her problem in a wider context."  Kirby also discusses the "democratic deficit," again stressing that the "foreign" decisions are not binding, but also acknowledging that "the protection of vulnerable and sometimes unpopular minorities" is at the heart of his argument:

For the rights of such people, democracy imports special protection by the independent courts. Such courts remind transient majorities that a democracy includes all of the people. Minorities have fundamental rights that the majority may not neglect or override. International human rights law is useful in expressing and clarifying what such rights entail. That is what sometimes makes it useful for municipal judges to have regard to the growing body of international law and jurisprudence.

After Kirby's speech, there was a panel discussion with Professor Michael Blumenson and Con Law Prof and former Justice of the Massachusetts Supreme Judicial Court John M. Greaney.  The printed versions of the Lecture and Panel Discussion are both available on the law review's website here, as is a public conversation on judicial review and "queer rights," also available on ssrn here.

Interestingly, Kirby "debated" Justice Scalia in Sydney last week on similar issues of "foreign" law - - - with any luck a fuller report (or transcript) of that discussion will be forthcoming.

Listed below are links to weblogs that reference Citations to "Foreign" Law on Constitutional Matters: