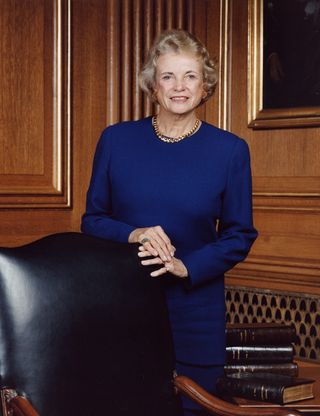 The Caperton v. Massey saga is cause for retired Justice O'Connor's concern over the Court's recent decision in Citizens United v. FEC.  According to a report in the Washington Post this evening by Robert Barnes,  O'Connor told law students at Georgetown:

"In invalidating some of the existing checks on campaign spending, the majority in Citizens United has signaled that the problem of campaign contributions in judicial elections might get considerably worse and quite soon."

O'Connor, however, didn't necessarily limit her criticism to judicial campaigns.  Citizens United rejected precedents such as McConnell v. FEC, and Barnes quotes O'Connor as stating: "Since I was one of several authors" of the McConnell opinion, "if you want my legal opinion, you can go read it." The NYT has a similar report, adding that unlimited campaign spending might result in "mutually assured destruction."

Not necessarily related to campaign spending or judicial elections, O'Connor also stated that she doesn't worry about her decision in Bush v. Gore.

However, in an op-ed in the Los Angeles Times, ConLawProf and now Dean at UC-Irvine School of Law Erwin Chemerinsky linked Bush v. Gore and Citizens United, characterizing both opinions as conservative judicial activism.

Listed below are links to weblogs that reference Sandra Day O'Connor on Judicial Campaign Spending:

When Chemerinsky moved to Duke, I selfishly bemoaned the likely absence of his regular editorial pieces for the LA Times. I'm glad he's back in California if only because we have once more his informative, provocative and, yes, learned editorial pieces to savor along with our morning cup of coffee (or tea...). Not surprisingly, I agree with him on the judicial activism assessment, although the recent case strikes me as the more egregious one if only for its transparent lack of respect for the principle and practice of stare decisis.

I concur that McConnell v. FEC is probably the worst Supreme Court decision since Gore v. Bush. These cases do not follow precedent -- the term "judicial activism" is too moderate to describe what took place.

The decision has global foreign policy consequences. It undermines the U.S. from being taken seriously when it takes action to promote "the rule of law."

The McConnell decision illustrates that the U.S. Supreme Court has become a 9-person legislature. What should be done?

The election in Massachusetts complicates things, but it does not mean that some clever people cannot get around the court's decision.

I would propose that the SEC go through the rule-making process to establish a regulation that before a corporation (an artificial person), give money to political candidates or enter the political arena, such action must be approved by persons holding a majority of external shares to overcome a presumption of the corporate officers and directors committing "waste."

From my perspective to spend money in the political area might give rise to a shareholder lawsuit. I am not a securities lawyer, but I would welcome any feedback on the idea.

Just to make things a little interesting, I hope some Senators propose:

1) treating these artificial persons as subject to a reinstituted draft for military service, where the CEO would have to serve if the corporation cannot -- while the physical criteria for service might have to be waived, such accomplished managers certainly could assist in managing procurements;

2) seeking to expand the size of the Supreme Court to 15 -- even if not successful a healthy debate will ensure.

3) asking George Soros to fund an effort to ascertain whether Justice Thomas ever discussed Roe v. Wade when he was in law school. I would have thought had he not, it would have disqualified him. In any case, perhaps, if some people are willing to testify, we might have a potential perjury case.

The Supreme Court's most recent decision will do great damage to our political system.

On the more serious side, perhaps the idea should be advanced that as a matter of bi-partisanship that the leadership of the Senate come to an agreement that all individuals seeking to become Supreme Court justices be confirmed by 2/3rds of the U.S. Senate. Doing this could help ensure that the court be composed of persons with a judicial demeanor rather than persons seeking to advance their own agenda.

Professor Walter J. Kendall III once commented that if one were to have the opportunity to make one amendment to the Constitution, the above concept would be it. The amendment process is difficult, but putting the idea informally into practice without needing to amend the constitution could be an important first step.

My understanding of the U.S. Supreme Court’s ‘purpose’ is to clarify current word of law, only where clarification is called for. The English language we use in the US is not so complex that they should be called on that often . And they should not use their pulpit to preach law philosophy.
The U.S. citizens gave to the U.S. Supreme Court a journeyman’s task. Not a creative one.
If the U.S. Federal courts would stick to the word of current law. Philosophy and creation would be required only by new laws passed by the U.S. Congress.