The challengers to the constitutionality of California's Proposition 8 are expected to rest their case today after almost two weeks of trial. (Our last post, with previous trackbacks including a primer, is here).

*    Jerry Sanders, Republican mayor of San Diego, whose testimony (reiterated in his HuffPo column) included discussions about his lesbian daughter who married her partner in Vermont last year;

*    M.V. Lee Badgett, (pictured left) Professor of Economic at Amherst, and author of When Gay People Get Married, whose testimony included the economics of marriage and whether same-sex marriage would have a harmful effect, including an economic effect on opposite-sex marriage.

*    Ryan Kendall, presently employed in law enforcement, testified regarding his family's hostility toward his sexuality. His testimony, admitted over defense objection, was that his family discovered his sexuality when he was 13, forced him to undergo "conversion therapy" to change his sexuality, and became increasingly hostile when the therapy was unsuccessful, causing him to feel suicidal. 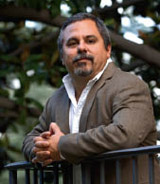 *    Gary Segura, Professor of Political Science and chair of Chicana/o Studies at Stanford, (pictured right) testified that GLBT people do not possess a meaningful degree of political power, including stating that religion was a major obstacle to GLBT political advancement and that President Obama was not a reliable ally of GLBT people. On cross-examination, the attorney defending Prop 8 played a video of Obama. Interestingly, at the end of Segura's testimony, Judge Walker reportedly asked Professor Segura whether losing elections or failures to get legislation passed denotes political powerlessness.

*    Hak-Shing William Tam, called by the challengers and cross-examined by Boise as an adverse witness, testified regarding his views of homosexuality, including its link to pedophilia and as destructive to Asian families, as reasons for his activism in favor of Prop. 8. Questioning from the proponents of Prop. 8 sought to distance Tam from protectmarriage.com.

*    Gregory Herek, Professor of Psychology at UC-Davis, was the witness on Friday. He testified on direct that sexual orientation is not chosen and is stigmatized. The cross-examination of Hereck lasted more than five hours, with some discussion of Sigmund Freud's theories.

Also admitted were video depositions of Professors Katherine Young and Paul Nathanson, both at McGill University and co-authors of Legalizing Misandry: From Public Shame to Systemic Discrimination Against Men.  They were originally scheduled to be witnesses for the defendants of Proposition 8.   Transcript excerpts here and here, video excerpts here and here.

If, as expected, the Prop 8 challengers rest their case today, and however quickly the Prop 8 defense attorneys complete their case, a resolution is not expected soon.  Judge Walker is reportedly expected to schedule the closing arguments for several weeks after the trial concludes.