The likelihood of an Executive Order on "indefinite detention" is being widely discussed.  For example, the Washington Post reported yesterday:

Obama administration officials, fearing a battle with Congress that could stall plans to close the U.S. prison at Guantanamo Bay, are crafting language for an executive order that would reassert presidential authority to incarcerate terrorism suspects indefinitely, according to three senior government officials with knowledge of White House deliberations. 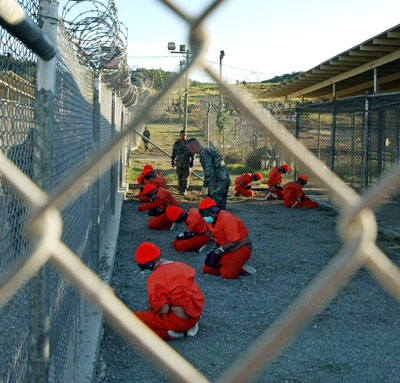 Glenn Greenwald at salon.com here has extensive coverage with lots of links and discussion, especially focusing on criticisms of Obama's failure to keep his campaign pledges to be different from Bush.

NPR, however, has reported on a proposal "from two experts outside of government"  that "is already being discussed in the Obama administration."  The proposal is from the Brookings Institution, heralded with this opening salvo: "A consensus is beginning to emerge in the public and political spheres concerning the non-criminal detention of terrorist suspects."  The NPR story, however, has one of the two authors of the report acknowledging that " it will be controversial."

The proposal is definitely worth a look.  Entitled "Designing Detention: A Model Law for Terrorist Incapacitation," and authored by Benjamin Wittes and Colleen A. Peppard, download here, the first 27 pages is an analysis and discussion.  For scholars and policy analysists, this discussion provides an excellent overview of the controversies.

The last 10 pages - - - the Appendix - - -  is actually a model statute (or perhaps Executive Order?).  It provides from some judicial oversight, although a suspension of the rules of evidence during those hearings, and numerous other specifics.  For those teaching this summer, whether in the US or elsewhere, this proposal would make an excellent exam question.

Listed below are links to weblogs that reference "Preventative Detention Model Act": Framework for Obama?: