Federal Judge Jeffery White in San Francisco has substantially denied the motion to dismiss the civil complaint filed by Jose Padilla against John Yoo, formerly of the DOJ, now on leave from UC-Berkeley (Boalt Hall).

[War] will compel nations the most attached to liberty to resort for repose and security to institutions which have a tendency to destroy their civil and political rights. To be more safe, they at length become willing to run the risk of being less free.
The Federalist No. 8, at 44 (Alexander Hamilton) (E.H. Scott ed., 1898).
The issues raised by this case embody that same tension – between the requirements of war and the defense of the very freedoms that war seeks to protect.

However, the judge soon provides a detailed recitation of the allegations of the complaint and then engages in a closely reasoned opinion relying on United States Supreme Court precedent as well as numerous Ninth Circuit cases.  Judge White acknowledges the separation of powers issues in this Bivens complaint, and interestingly has this comment about Yoo's argument for absention:

Yoo also advocates that this Court should abstain from adjudication because the Court should leave review of his legal memoranda and the conduct which followed to the coordinate branches of government based on substantive areas of law raised by the memoranda. The Court notes the irony of this position: essentially, the allegations of the complaint are that Yoo drafted legal cover to shield review of the conduct of federal officials who allegedly deprived Padilla of his constitutional rights. Now, Yoo argues that the very drafting itself should be shielded from judicial review. Padilla’s allegations here are that the creation of such legal cover was itself an unconstitutional exercise of power. Thus, the question posed by the present motion is whether an alternative branch of government, under the circumstances, should be tasked with prescribing the scope of relief available to Padilla. 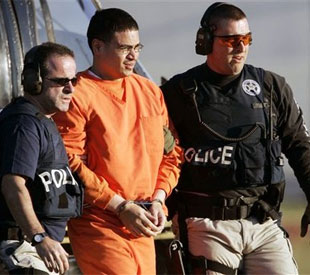 Judge White also denies Yoo's claim of qualified immunity,  including the claim that there is insufficient causation (linking the memos to the actions against Padilla).

The Judge's Order denies the motion to dismiss "as to all claims with the exception of the claim for violation of Padilla’s rights under the Fifth Amendment against compelled self-incrimination."  The Judge granted Yoo's motion because "there is no allegation in the complaint before this Court that Padilla was ever made to be a witness against himself or that his statements were admitted as testimony against him in his criminal case," and thus  "he has not stated a claim for violation of the Self-Incrimination Clause of the Fifth Amendment." Order at 37.  Padilla has leave to amend this allegation by July 10.  Yoo has twenty days to file his responsive pleading.

This is an opinion worth reading, just as this case will be worth watching as it proceeds.

I wonder if ex-parte young is the doctrine the court is considering here to continue this case. I would also think it would apply to Rumsfield, Cheney, Bush etc?

I'd like your take on the Obama administration's filing of an amicus brief supporting Mr. Yoo's position. (Jon Turley's opinion here: http://the7figurecode.com/blog20/?p=1)

I wonder if ex-parte young is the doctrine the court is considering here to continue this case. I would also think it would apply to Rumsfield, Cheney, Bush etc?