The United States Supreme Court, in a 5-4 opinion issued today, has held that "in all the circumstances of this case, due process requires recusal."  The case involves Justice Brent Benjamin, now the Chief Justice of the West Virginia Supreme Court of Appeals (pictured below). 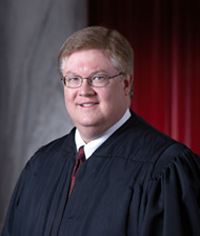 As previously discussed here, the Court had certified the question as:

Justice Brent Benjamin of the Supreme Court of Appeals of West Virginia refused to recuse himself from the appeal of the $50 million jury verdict in this case, even though the CEO of the lead defendant spent $3 million supporting his campaign for a seat on the court--more than 60% of the total amount spent to support Justice Benjamin's campaign-- while preparing to appeal the verdict against his company.  After winning election to the court, Justice Benjamin cast the deciding vote in the court's 3-2 decision overturning that verdict. The question presented is whether Justice Benjamin's failure to recuse himself from participation in his principal financial supporter's case violated the Due Process Clause of the Fourteenth Amendment.

For the Court, Kennedy poses the issue as "“under a realistic appraisal of psychological tendencies and human weakness,” the interest “poses such a risk of actual bias or prejudgment that the practice must be forbidden if the guarantee of due process is to be ade­quately implemented,” citing Withrow v. Larkin, 421 U. S. 35, 47 (1975).   Applying that standard, he writes that "Not every campaign contribution by a litigant or attorney creates a probability of bias that requires a judge’s recusal, but this is an exceptional case."

We con­clude that there is a serious risk of actual bias—based on objective and reasonable perceptions—when a person with a personal stake in a particular case had a significant and disproportionate influence in placing the judge on the case by raising funds or directing the judge’s election campaign when the case was pending or imminent. The inquiry centers on the contribution’s relative size in comparison to the total amount of money contributed to the campaign, the total amount spent in the election, and the apparent effect such contribution had on the outcome of the election.

Opinion at 14.  The Court  addresses the "floodgates" argument by reasserting that the facts before the Court are "extreme by any measure,"  Opinion at 17, but Roberts' dissenting opinion lists a series of 40 numbered issues (often with multiple questions) which illustrate both "floodgates" rhetoric and "slippery slope" rhetoric including:

(question 20) Does a debt of gratitude for endorsements by newspa­pers, interest groups, politicians, or celebrities also give rise to a constitutionally unacceptable probability of bias?  How would we measure whether such support is disproportionate?

(question 34) What about state-court cases that are already closed? Can the losing parties in those cases now seek collat­eral relief in federal district court under §1983?  What statutes of limitation should be applied to such suits?

The Court's opinion reaffirms that due process establishes the minimum requirements and that state codes of judicial conduct may adopt more rigorous recusal standards, Opinion at 19.