One of the very best volume on South African Constitutional Law remains The Post-Apartheid Constitutions edited by Penelope Andrews and Stephen Ellman, published in 2001.  This anthology provides a study of the "processes of negotiation" of the constitutions as well as an analysis of the final constitution of 1996.  The University of Cape Town Faculty of Law uBuntu Project is hosting me later this month (if you are in the neighborhood, invitation here); to prepare I find myself reading and re-reading the rich literature on South African constitutionalism.

However, even for Americans with little interest in non-US constitutions, many of this volume's essays  - - - on constitution-making, negotiation, "deadlock," the certification (ratification) process, the "key players," and the Bill of Rights - - - shed light on theories of originalist constitutional interpretation in the US.  Stephen Ellman's exceedingly important chapter comparing United States doctrines of state action and "South Africa's Socio-economic Rights Guarantees to Private Actors," seeks to use "American efforts to grapple with state action" to "illuminate the issues facing South African courts" applying a more expansive notion.  However, Ellman's essay constructs a two-way mirror: Americans can use the South African constitutional notions to "illuminate" the issues faced by courts confronting the sometimes limiting state action doctrine.

The contribution of the other co-editor, Penelope Andrews, is also vital.  Entitled "The Stepchild of National Liberation: Women and Rights in the New South Africa," Andrews discusses how women pressed their concerns and win a place at the negotiating table.  Again, this experience distinguishes the US constitutional-framing context.  Yet as Andrews notes, even in the 1990s the claims of customary and traditional law could conflict with claims for gender equality, especially in the rules about property, ownership, and guardianship of children.

Andrews doesn't mention marriage or polygamy in this piece, although she has written about it elsewhere (on ssrn here and here); she is quoted in today's Washington Post in an article entitled "Which Mrs. Zuma Will Be South Africa's First Lady?" discussing  the ramifications of the fact that the new President of South Africa, Jacob Zuma, is a practicing polygamist.  The "First Lady" is not a position in the South African or US constitution, but for all the attention and anxiety it can generate (especially when potential heads of state are polygamous, or unmarried, or female, or perhaps divorcing) it might seem as if there should be some constitutional clarity.  As the WaPo article comments, "South Africans are still in the dark about who will be Zuma's date to galas and have dibs on the spousal office in the east wing of the president's hilltop residence in Pretoria, the administrative capital."

Current controversies, however, do not detract from the relevance of The Post-Apartheid Constitutions. It is an excellent volume that remains timely, not only in its historical discussions but in its concerns.  The major omission in the volume is a lack of attention to sexuality issues and insufficient attention beyond Andrews' essay to gender issues.  South African constitutional law has been recognizing many sexuality rights, due in part to "sexual orientation" being a ground of discrimination in the Constitution.   Good sources on the issue include American ConLawProf Mark Kende's new book previously blogged here which has a chapter on "gay rights" and the South African Journal of Human Rights, which has had several special issues on sexuality including volume 23 part 3 (2007) and volume 20 part 2 (2004). 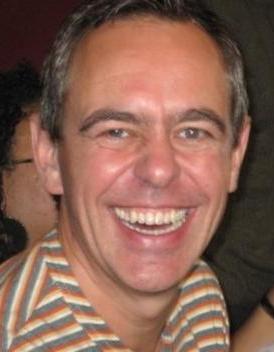 Another great source on sexuality, constitutional law, and South African politics is the website website Constitutionally Speaking by South African ConLawProf Pierre de Vos (pictured above)   It is a must read for anyone trying to keep up with the legal landscape in South Africa.

Imagine what it would like to be an individual who is both gay and a
member of a racial/ethnic group. Would this have a positive or
negative impact, or both?