Rivera on Sotomayor - the diversity factor

Interviewed on PBS News Hour here, my colleague Jenny Rivera of CUNY School of Law had this to say about Sotomayer (for whom she clerked) in terms of background, judicial diversity, and decision-making:

GWEN IFILL: Well, I want to pick up on that with Jenny Rivera, because you talk about the real life experience of a Thurgood Marshall. How much of the real-life experience of a Sonia Sotomayor could you be expected to actually have an impact in some place as august as the Supreme Court?

JENNY RIVERA: Well, as she said today, her life experiences have informed who she is. They've shaped who she is. It certainly shapes the way the world perceives her.

She grew up, as we all know now, very humble beginnings, grew up basically at the knee of her mother. And so those experiences are going to inform the way she sees those cases.

GWEN IFILL: Jenny Rivera, how much is there -- is there a just concern about identity politics beginning to define the day for picks like this? Here we have another first.

JENNY RIVERA: Well, I think the president didn't make a choice based on identity politics. He made the choice based on the merits of her intellectual capabilities, on the experience that she brought to the court.

And you heard David Axelrod say, you know, the fact that she happens to also be Latina and be a woman, it's wonderful that we can bring that to the court. But this was a choice based on the strength of her background, her experience, and her intellect. And, certainly, that's important.

But at the same time, we have to recognize that the court is vulnerable to criticism that it doesn't look like the rest of the country and therefore is insensitive to those issues, and it is encased in this bubble, and there's an insularity about the court.

So it is important that we all feel that all sections, all branches of government somehow have a certain integrity behind them and really speak to people.

And I think certainly President Obama, when he says he's looking for someone who has empathy and who understands the implications of these cases on real people, is recognizing also the significance of the judiciary, not just the executive branch, not just the legislative branch, being a branch of government that all people in the United States, all our various, diverse communities can feel carry a certain integrity behind them and rule not based on appearances, but look at the merits of the case, and apply the rule of law, and apply those values of the Constitution.

So, given that appraisal, perhaps we could expect Judge Sotomayer to say something like this in her confirmation hearing?

I don't come from an affluent background or a privileged background. My parents were both quite poor when they were growing up.

And that's why I went into that in my opening statement. Because when a case comes before me involving, let's say, someone who is an immigrant -- and we get an awful lot of immigration cases and naturalization cases -- I can't help but think of my own ancestors, because it wasn't that long ago when they were in that position.

And so it's my job to apply the law. It's not my job to change the law or to bend the law to achieve any result.

If so, she'd be repeating exactly what Judge Alito said in the Senate Confirmation hearings - - - as quoted by Glenn Greenwald on salon.com today. 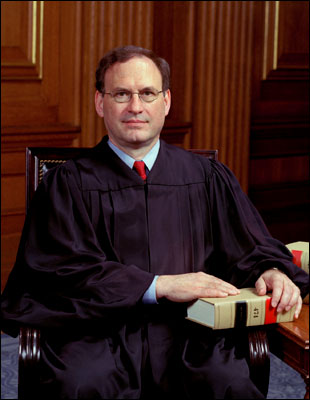 Listed below are links to weblogs that reference Rivera on Sotomayor - the diversity factor :