Professors Goodwin Liu (Boalt Hall), Pamela Karlan (Stanford), and Christopher Schroeder (Duke) just published Keeping Faith with the Constitution, a bold challenge to originalism (in all its stripes), on the one hand, and to "living constitutionalism," on the other, and a clear argument for a richer approach they call "constitutional fidelity."  The book is one of a pair just released by the American Constitution Society.  (The other is a collection of works on constitutional interpretation titled It is a Constitution We are Expounding.)  You can download a full copy on the ACS site, here.  (Disclosure: I am an ACS member and sit on the Board of Advisors of the Chicago Lawyer Chapter.) 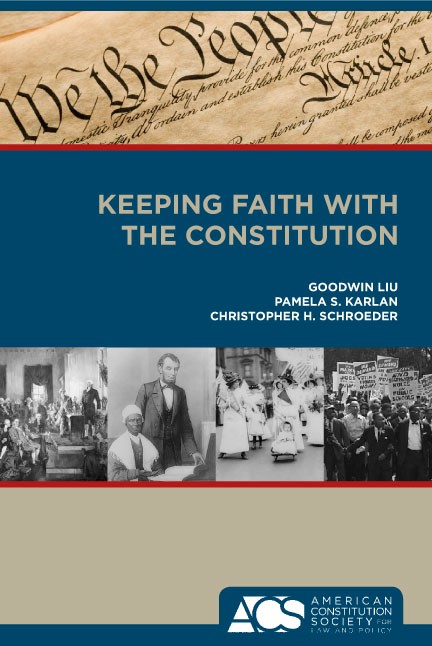 "Constitutional fidelity" is an approach to constitutional interpretation that starts with the text's principles and draws on a variety of sources to apply those principles to contemporary problems:

Interpreting the Constitution, we argue, requires adaptation of its broad principles to the conditions and challenges faced by successive generations.  The question that properly guides interpretation is not how the Constitution would have been applied at the Founding, but rather how it should be applied today in order to sustain its vitality in light of the changing needs, conditions, and understandings of our society. . . .

To be faithful to the Constitution is to interpret its words and to apply its principles in ways that preserve the Constitution's meaning and democratic legitimacy over time.  Original understandings are an important source of constitutional meaning, but so too are the other sources that judges, elected officials, and everyday citizens regularly invoke: the purpose and structure of the Constitution, the lessons of precedent and historical experience, the practical consequences of legal rules, and the evolving norms and traditions of our society.

The authors argue that this approach is not only most consistent with the history of our constitutional practice, but it's also the best way to preserve the document--as it was and is intended to be preserved--over the long haul.

This book promises to make a serious, even defining, contribution to the literature and debates over constitutional interpretation at a potentially watershed moment, at least with regard to constitutional interpretation in the political branches.  And the web-based release and easy, accessible style will make possible a wide distribution and readership.  I highly recommend this excellent work.

Listed below are links to weblogs that reference Liu, Karlan, and Schroeder on Constitutional Interpretation:

While the two books, especially Keeping Faith with the Constitution, seem sound at a certain level of abstraction, and claim to reject the "living Constitution" approach to constitutional construction, when they get to the details they largely embrace that approach, and accept what some historians would regard as departures from constitutional fidelity as better "understandings" of it. That is especially brought out in their treatment and acceptance of broad interpretation of the commerce and Necessary and Proper clauses.

I bring out some of this in my article, Principles of Constitutional Construction at http://www.constitution.org/cons/prin_cons.htm , in which I point out that "strict" construction properly means narrow interpretation of government powers and broad interpretation of individual rights (or more precisely, immunities). As I also discuss in my article, Presumption of Nonauthority and Unenumerated Rights, at http://www.constitution.org/9ll/schol/pnur.htm , there is a fundamental right to a presumption of nonauthority that invalidates such doctrines as deference to a legislature or to administrative agents.