Legalization of Marijuana: A Matter of Substantive Due Process? 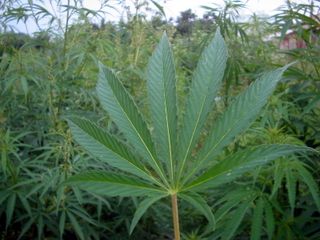 The San Francisco Chronicle editorialized about the California Governor's comments:

With a rhetorical shoulder-shrug, Gov. Arnold Schwarzenegger said it's time to consider legalizing marijuana. His thoughts were the loose-fit variety: "I think it's time for a debate" and free of any specifics. Still, the idea is worth a serious study to assess the advantages and risks of trying to tax, regulate and control the drug.

The Stanford Progressive has a brief piece in its May issue by Ross Raffin expressing disappointment in Obama's "public hesitation towards marijuana legalization," but contending:

At the heart of the marijuana debate is federalism, the separation of state and national governmental power. For most of America's history, marijuana was treated as a crop subject to state regulation. However, the national government justified regulating marijuana through a variety of means, mainly the Commerce Clause of the Constitution which gives Congress power to regulate inter-state trade.

civil libertarian case for repealing marijuana possession crimes. We put forward two arguments, corresponding to the two distinct liberty concerns implicated by laws that both ban marijuana use and punish its users. The first argument opposes criminalization, demonstrating that marijuana use does not constitute the kind of wrongful conduct that is a prerequisite for just punishment. The second argument demonstrates that even in the absence of criminal penalties, prohibition of marijuana use violates a moral right to exercise autonomy in personal matters – a corollary to Mill's harm principle in the utilitarian tradition, or, in the non-consequentialist tradition, to the respect for personhood that was well described by the Supreme Court in its recent Lawrence v. Texas opinion. Both arguments are based on principles of justice that are uncontroversial in other contexts.
Lawrence's famous "caveat" paragraph - - - in which the Court excluded possible extensions of its judgment to same-sex marriage, commercial sex, or controversies involving minors - - - did not mention marijuana (or other drug laws).   Yet the applicability of Lawrence's problematizing of a state interest in "morality" is easily applied by Blumenson and Nilsen to laws criminalizing marijuana.  As for a "right to smoke marijuana," they observe that "the Supreme Court‘s found no right to engage in sodomy in Bowers v. Hardwick but later [in Lawrence] reversed itself in finding a right to autonomy in intimate relations."   Likewise, they argue, the right to use marijuana invokes "the rights to control one‘s body, to freedom of thought, to privacy in one‘s home, and to the pursuit of happiness."

Policy, legal, constitutional, and philosophical arguments about the (de)criminalization of marijuana have been around for at least three decades.  But new or not, prospects of reform are being seriously discussed.

Listed below are links to weblogs that reference Legalization of Marijuana: A Matter of Substantive Due Process?: