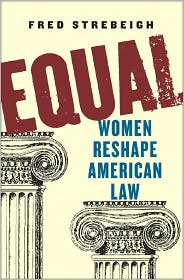 Strebeigh's new book, Equal: Women Reshape American Law, published by WW Norton, might be a good book to recommend to students entering law school or students preparing for their first Constitutional Law course.   The book has been getting some good press, but this analysis from Michael O'Donnell's review in the April 27 issue of The Nation gives one pause:

Notably absent from the book is any significant discussion of abortion rights, which in this country have largely been won in courts rather than legislatures. Some readers, viewing reproductive freedom as the most fundamental of women's rights, may see the omission as a major oversight, although Strebeigh may simply have wanted to avoid retelling a familiar story. On the conceptual level, though, Strebeigh's decision makes sense: much of the constitutional discussion in the book centers around the Fourteenth Amendment's straightforward equal protection clause, whereas abortion rights are based on the murkier and more malleable due process clause--which, on its face, says nothing about abortion. Many important legal advances, including abortion rights but also, lately, protections for gays and lesbians, would wobble less today if they rested on the sturdier foundation of equal protection, with its relatively clear textual guarantee. Leaving aside abortion law allows Strebeigh to avoid having to untangle legally (as opposed to politically) knotty problems.

Certainly, whether or not the equal protection clause is "straightforward" is debatable.  Also debatable is the question whether equality or the reshaping of American law should be discussed in a book without some attention to abortion or other reproductive rights.

Listed below are links to weblogs that reference Equal - Fred Strebeigh's History of Women and Law: