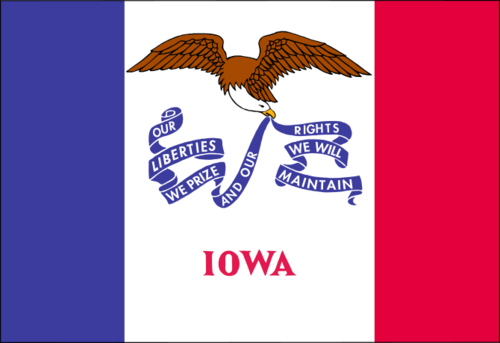 In each of those instances, our state approached a fork in the road toward fulfillment of our constitution’s ideals and reaffirmed the “absolute equality of all” persons before the law as “the very foundation principle of our government.”

In considering the issue of the constitutionality of the state statute prohibiting same-sex marriage, the Iowa Supreme Court interprets its state constitutional provisions of equal protection:  Iowa Const. art 1 § 16 provides: “All laws of a general nature shall have a uniform operation; the general assembly shall not grant to any citizen or class of citizens, privileges or immunities, which, upon the same terms shall not equally belong to all citizens;”  Iowa Const. art. I, § 1 provides: “All men and women are, by nature, free and equal . . . ."    The Court's opinion is a model discussion of the tiers of equal protection - great for classroom use.

The Iowa Supreme Court concludes that the classification the state is making is one of sexual orientation (not gender, as had been argued and as some other courts have found).  In deciding what level of scrutiny should be applied, the Iowa Supreme Court looked to four factors, derived from United States Supreme Court precedent, and rooted in Carolene Products footnote 4:

In its application of  intermediate scrutiny, the Iowa Supreme Court considered the governmental objectives proffered by the state: support for the “traditional” institution of marriage, the optimal procreation and rearing of children, and financial considerations.   Again, in a model of analytic clarity, the Iowa Supreme Court looked at whether each government interest was "important" and then whether each government interest was substantially related or fairly advanced by the classification.

Regarding the traditional institution of marriage state objective, the Iowa Court found that "A specific tradition sought to be maintained cannot be an important governmental objective for equal protection purposes, however, when the tradition is nothing more than the historical classification currently expressed in the statute being challenged." Opinion at 52.   Regarding the other three objectives, the Iowa Supreme Court found the problem was that the classification did not substantially further the government objective.

In its last pages, the Court's opinion addresses the "religious opposition" to same-sex marriage, "left unspoken" by the state, concluding that this silence reflects a correct belief that religious sentiment cannot be used as a reason to justify a ban on same-sex marriage under the state constitution.  Opinion at 63-64.  The Iowa Supreme Court also considers the remedy - rejecting the approach of other states regarding legislative equivalents such as civil unions and concluding:

the language in Iowa Code section 595.2 limiting civil marriage to a man and a woman must be stricken from the statute, and the remaining statutory language must be interpreted and applied in a manner allowing gay and lesbian people full access to the institution of civil marriage.

Listed below are links to weblogs that reference Analysis of Iowa Supreme Court ruling on same-sex marriage:

Great legal analysis, speedily accomplished. I'm about to post a link on my blog (wordinedgewise.org), where I provide an analysis intended primarily for interested and intelligent "lay" readers.

It appears that the Iowa court quoted heavily from the California decision. Do you think that as state courts have more persuasive authority to cite from, finding for inclusive marriage will become more likely? As it seems like the states' arguments are largely the same from case to case, do you think it will be harder for courts to agree with them given that now four state supreme courts have succinctly dismissed each?