In her section, “Equality and Feminism,” Krishnaswami lists and describes the following articles:

Sandra Day O'Connor, The Legal Status of Women: The Journey Toward Equality, 15 L.J. & Religion 29 (2000-2001). In these remarks on the legal and social status of women, Justice O'Connor begins by sketching the development of women's rights in the United States. She remarks that “the path taken by American women can offer useful insight to the international observer,” although neither the Constitution nor the Bill of Rights expressly provided women with any rights. Id. at 29-30. Juxtaposing the emergence of women's rights in the United States, Justice O'Connor highlights how international agreements and treaties such as the Charter of the United Nations, the Universal Declaration of Human Rights, and the Convention on the Elimination of All Forms of Discrimination Against Women, have served to make women's rights synonymous with human rights. Id. at 33-35. She offers three lessons to women throughout the world from the American experience of the development of women's rights: (1) judicial or legislative change is more likely to be successful if preceded by public opinion; (2) in addition to democratic institutions and documents ensuring equality, all women must participate in political life; and (3) substantial change requires that people transcend their differences. Id. at 35. Finally, Justice O'Connor recognizes Tunisia as a leader among Arab, North African, and Middle Eastern nations in securing women's rights. Id. at 36.

Sandra Day O'Connor, The Supreme Court and the Family, 3 U. Pa. J. Const. L. 573 (2001). This is a transcript of a short talk given by Justice O'Connor as part of the University of Pennsylvania's Law School sesquicentennial celebration and Family Law Symposium. After observing that the family is “at the heart of ... American law,” Justice O'Connor discusses the challenges posed by the development of family law jurisprudence. Id. at 573-74. She observes that the Supreme Court is merely “one voice” in the development of the same. Id. at 574. Further, she argues that because family cases involve the “intertwined” rights of individuals, the  application of due process jurisprudence may not be the most appropriate avenue for resolving these disputes. Id. at 575-76. Justice O'Connor discusses three Supreme Court cases to illustrate her point: Troxel v. Granville, Moore v. City of East Cleveland, and Santosky v. Kramer.

Sandra Day O'Connor, The History of the Women's Suffrage Movement, 49 Vand. L. Rev. 657 (1996). At the beginning of this article, which was originally delivered as a speech commemorating the 75th anniversary of the Nineteenth Amendment, Justice O'Connor offers “a flavor” of the battle waged by women for the right to vote. She continues to posit, “what was it all for?” Id. at 668. To answer this query, Justice O'Connor discusses the effect of women on elections and politics and observes that women's votes reflect individualism rather than the vote of their husbands or other women. Id. at 669-70. In discussing the advances that American women have made, Justice O'Connor's tone is positive, even as she observes that this progress has been “fitful.” Id. at 670.

Sandra Day O'Connor, Testing Government Action: The Promise of Federalism, in Public Values in Constitutional Law 35 (Stephen E. Gottlieb ed., 1993). This text is a compilation of papers presented at a conference hosted by Albany Law School on September 26-28, 1991, focusing on the concept of compelling government interest.

Sandra Day O'Connor, Portia's Progress, 66 N.Y.U. L. Rev. 1546 (1991). Marking the hundred-year anniversary of the admission of women into New York University School of Law, Justice O'Connor begins by highlighting the advances of women in the legal profession, tracking her own experience from being offered a position as a legal secretary after graduating from law school to serving as a U.S. Supreme Court Justice. She provides examples and discusses her present ideas about gender differences, noting that contemporary ideas about gender differences are eerily similar to past gender stereotypes and rationales invoked to keep women out of the public sphere. Id. at 1549-53. To be sure, Justice O'Connor admits that women bear the burden of childrearing and housekeeping to a greater extent then men and again cites her own experience of resuming her career in earnest only after raising children. Therein lies the dilemma for Justice O'Connor and the crux of the article: the Court's treatment of pregnancy, which she outlines succinctly. To conclude, Justice O'Connor remarks,

[w]omen do have the gift of bearing children, a gift that needs to be accommodated in the working world. However, in allowing for this difference, we must always remember that we risk a return to the myth of the “True Woman” that blocked the career paths of many generations of women.

Of course, O’Connor’s scholarly writings on feminism and gender are substantially fewer than those of 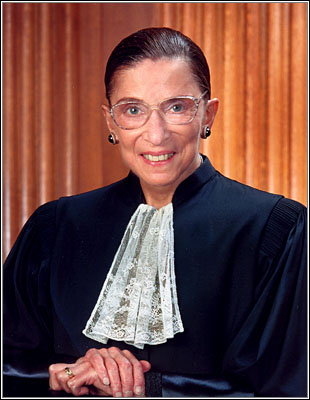 The Bibliography goes on to list numerous articles written during this period.  One favorite is  All about the E.R.A. in Cosmopolitan, Nov. 1979, in which Ginsburg writes, “We do not regard men as the ‘enemy,’ of course. Most of us are very fond of them . . .” which Valentine suggests is “a somewhat amusing reminder of the sorts of stereotypes supporters of the E.R.A. faced in 1979.”   Most of the pieces are more substantial, including Some Thoughts on Benign Classification in the Context of Sex, 10 Conn. L. Rev. 813 (1978) and Constitutional Adjudication in the United States as a Means of Advancing the Equal Stature of Men and Women Under the Law, 26 Hofstra L. Rev. 263 (1997). Additionally, the Bibliography lists works about Ginsburg, many of which focus on her gender equality work, on and off the Court.

Comparisons of O’Connor and Ginsburg, including their ideas of gender equality and feminism, are inevitable given their status as the only two women to serve on the United States Supreme Court in its history.  These two Bibliographies provide some evidence on which to make such comparisons  - - - I think bibliographies can be a great way to start (to jump-start!) one's scholarly research and to provide to students for their own class papers or law review pieces.   But additional Bibliographies on the several additional women Supreme Court Justices to be appointed for the next vacancies would be a welcome addition.

Listed below are links to weblogs that reference O'Connor, Ginsburg & Feminism :