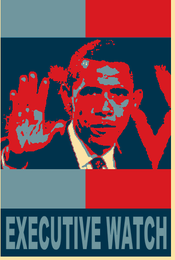 An article of interest on Obama's first month in office by Elizabeth Drew in The New York Review of Books is available here.

Drew portrays Obama as a thoughtful person and not a micro-manager.  She avers that "Obama's serene self-confidence can cause blind spots," citing the Judd Gregg fiasco as an example.  Of course Drew devotes a large part of her article to Obama's stance on the economy and his relationships with Republicans.

She also argues that part of the Executive's job description is to get along with Congress and others inside the Beltway - - - the "give-and-take of Washington."

And for sports-minded students, there is some video of Obama at a basketball game on Oliver Willis.  Now what might that say about Executive power?

Listed below are links to weblogs that reference Obama's "personality" and Executive power: