This week's Saturday Evening Review centers on Justice Ruth Bader Ginsburg, returning to the Court this week after surgery. 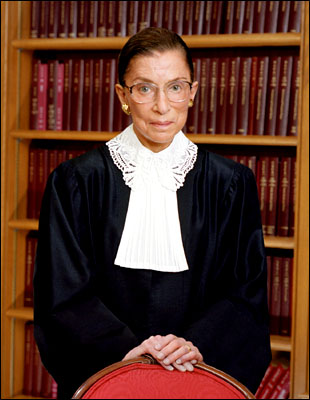 As Robert Barnes reported for the Washington Post on Tuesday,

Justice Ruth Bader Ginsburg returned to the Supreme Court bench yesterday with a wide smile and a long list of questions for the lawyers appearing before her, resuming her duties less than three weeks after surgery for pancreatic cancer.  Ginsburg, who will turn 76 next month, smiled broadly as she walked into the courtroom with her eight male colleagues and turned slightly to look directly at reporters who chronicled her Feb. 5 surgery and diagnosis of early-stage cancer.

Ginsburg was surely aware that "reports of her death had been greatly exaggerated."  Senator Jim Bunning (R-Ky) was widely quoted as saying that she had "bad cancer, not the kind you get better from" and predicted she would not live longer than a year.  As the Wa Po reported, Bunning apologized saying  "if my comments offended Justice Ginsburg" and said it was "great" to see her back at the court.

This is not Ginsburg's first encounter with cancer.  Responding to a question about how she coped with cancer during a March 2004 appearance at CUNY School of Law, Ginsburg answered:

During my battle with cancer, what saved me beyond anything, I will confess, is work. I was told that by my dear colleague, Sandra Day O'Connor, who had breast cancer some twenty years ago. Nine days after her surgery, she was on the bench listening to arguments. She told me that I should not miss a sitting if I could help it; that I should schedule my chemotherapy on a Friday so by Monday I would be over it. She told me to do whatever I could manage. Try to exercise as soon as you can, she counseled. If there are certain parts that won't move, then just move on to something else.

Work, more than anything else, carried me through that year. I didn't dwell on my physical discomfort. I regarded it as a nuisance I had to live with. The important thing was understanding this case or making this opinion comprehensible.  . . . So, I regarded work as my savior, and a family that rallied around me. . . .  [When I returned to the Bench] I sat there listening to the arguments, just as I would any other sitting day. There was some magic or some super power that made that happen.

7 New York City Law Review 221, 239-40 (2004) (Check out this volume of the NYC Law Review for articles on Ginsburg's judicial philosophy as well as a comprehensive annotated bibliography of works by and work about Justice Ginsburg).

Having witnessed those previous remarks, I was not surprised to hear that Ginsburg was an avid participant in all six arguments from this week, transcripts available at the US Supreme Court site here.

And she delivered the Court's opinion in United States v. Hayes (over a dissenting opinion by Roberts and Scalia) holding that the federal  Gun Control Act of 1968, 18 U. S. C. §921 et seq., as amended in 1996 to include  persons convicted of “a misdemeanor crime of domestic violence," included any misdemeanor crime of domestic violence, regardless of whether the domestic relationship was a defining element of the offense, assuming that the domestic relationship could be established at the trial for the Gun Control Act violation.  Ginsburg reasoned:

Firearms and domestic strife are a potentially deadly combination nationwide. See, e.g., Brief for Brady Center to Prevent Gun Violence et al. as Amici Curiae 8–15; Brief for National Network to End Domestic Violence et al. as Amici Curiae 2–8. Yet, as interpreted by the Fourth Circuit, §922(g)(9) would have been “a dead letter” in some two-thirds of the States from the very moment of its enactment. 482 F. 3d, at 762 (Williams, J., dissenting). As of 1996, only about one-third of the States had criminal statutes that specifically proscribed domestic violence.

Ginsburg's authorship of an opinion concerning domestic violence served as a stark reminder that she is the only woman on the United States Supreme Court.  (Compared with Australia's High Court, which now has three of its seven positions filled by women, which I've blogged here.)