Mark Kende, Con Law Prof at Drake University, has a forthcoming book, Constitutional Rights in Two Worlds: South Africa and the United States, due next month, from Cambridge University Press. 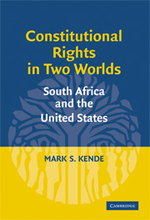 Kende has posted the Introduction to the book on ssrn, and explains the book thusly:

This book examines a crucial aspect of the South African transition: the Constitutional Court’s role in social change. The Court has enforced socioeconomic rights, supported gay marriage,and struck down the death penalty. How did the Court address these significant issues without much domestic human rights case law on which to draw?

He gives his reasons for comparing the US and South African constitutional frameworks as including the fact that both constitutions were the product of revolutions and both high courts are foundational institutions.  He notes the history of racism the two nations share as well as their present diversity, their common roots in British legal systems, and their original debates over the inclusion of rights in the Constitution.   Yet he also does not shy away from the differences.  The British legal system in South Africa was accompanied by the Dutch-Roman code, the racial minorities in South Africa are white, and the Constitution was framed by very different people in very different times in the two nations.

His Introduction serves as a quick rehearsal of the differences in the South African and US Constitutions and their High Courts, handy for a those unfamiliar with the material, including students.  But the Introduction also delves into what Kende names as one of the major themes of the book - - - the role of the judiciary in social change.  In the South African context, he notes:

scholars like Dennis Davis, Alfred Cockrell, Cathy Albertyn, and others write that the Court should be bolder and avoid a hazy minimalist “rainbow jurisprudence.” This view is startling given the Court’s novel decisions on socioeconomic rights, gay marriage, and the death penalty. Of course, South African progressivism ranges from those with a more individualist sensibility to those with a more African communal approach. But most South African legal academics advocate greater judicial activism . . .

The Introduction promises an exploration of the South African Constitution Court's decisions on the death penalty, gender discrimination, "gay rights," racial discrimination, freedom of speech and religion, and perhaps most importantly socio-economic rights.   With such an agenda, this book  should be a stellar contribution to comparative constitutionalism.

Listed below are links to weblogs that reference Constitution in Two Worlds - South Africa and US: Saturday Evening Review: