As many readers know, protests broke out in the U.S. this summer after police shot and killed an unarmed African-American teenager, Michael Brown, in Ferguson, Missouri on August 9.  Ferguson is part of the St. Louis area, roughly 10 miles (16 km) from the law school where I teach, Saint Louis University.  I returned from a summer of fieldwork in Ukraine in time to find St. Louis erupt in outrage, protest, and other civic labors.  The shooting brought to a head concerns over perceived racial disparities in police conduct.  Other issues, like municipal management, local budgeting, and local court procedures became linked in analysis and perception with practices that reenforce structural racism and perpetuate poverty. (My colleague Marcia McCormick has blogged about SLU Law and other local initiatives to address these problems.)  Protests, anger, disgust, and fear were re-ignited on October 8 when an off-duty police officer moonlighting as a security guard shot and killed a second African-American teenager, VonDerrit D. Myers, Jr., whose family is resident in my neighborhood and whose father works at Saint Louis University.  These and other incidents raise fears that police target citizens for attention not in crime-stopping or criminal investigation, but because of citizen phenotype and police cognition patterns.  (To look into your own, try the Harvard test.)

Two commonalities invite comparison between late summer in Ferguson and deep winter in Kyiv.  First is the form of public action, street protest.  It speaks of an electorate that, despite a polity's record of holding fair elections, resorts to alternatives to usual democratic processes.  The second, and most striking, commonality is the kind of spark that ignited protest, the relationship between citizen death at the hands of police and public assessments of state legitimacy. 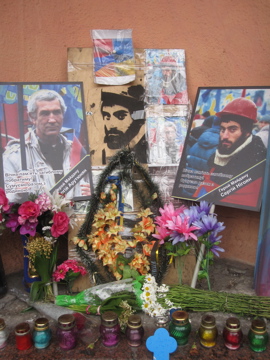 (My photo above features of one of several makeshift memorials in the protest area of central Kyiv to the first protester to die last winter in Ukraine, Serhiy Nigoyan, memorialized as a secular martyr.  The AP/Jeff Roberson photo below shows the memorial at the site of Michael Brown's shooting.)

Here in the U.S., Michael Brown's death opened legitimacy to serious reflection, articulated as questions regarding police tactics.  After Ukraine, the narrow scope of this critique of state power is striking.  In Ukraine, one citizen death at the hands of police authorities was seen as absolutely illegitimate.  Protests had already been underway for two months, but after Nigoyan's death, the intensity of resistance escalated.  Within a month, a government fell and its top office-holders fled the country.  In the U.S., protesters haven't even been able to secure reassignment of a local prosecutor in whom they fear bias.  This difference -- in expectations, measures, and consequences -- has many roots but is attributable in part, I think, to differential trust in the courts.  Although wary of the police, in the U.S. the protesting public are giving courts and judicial processes the benefit of the doubt and time to work through their deliberations.  Protesters last winter in Ukraine did not feel they had that luxury.

The U.S. protest situation may change dramatically soon.  A grand jury is still deliberating whether to indict the police officer who shot Michael Brown, Darren Wilson.  Rumor is running rampant in local legal circles that the grand jury will return a "no true bill," meaning the officer will not be indicted.  I want to make clear that this rumor is completely unproven; I repeat it only to report on the near-term mindset here.  If the grand jury does announce no indictment will be returned, two predictions:

2) reaction will change from protest to riot.

Apparently, I'm not alone in anticipating trouble.  Police are preparing and civic groups are formulating rules of engagement and otherwise pre-positioning calls for measured response.

Of course, "trouble" can be short-term (as in the previous paragraph) or long-term (as in racial disparities in police conduct).  These protests are notable in merging temporalities that are often bifurcated and "trouble," compartmentalized.  Ferguson and Kyiv are both dominated these days by anxiety over perceptions of legitimacy.  What may get lost amid the noise is that responses to both incidents, in Ukraine and in the U.S., reveal authority and state institutions in formation.