I write to share with my experiential educator colleagues a fairly recent addition to our work in the Immigration & Human Rights Clinic work at the University of the District of Columbia’s David A. Clarke School of Law (UDC Law).

On Friday September 28, we had the pleasure of partnering, for a second time, with non-profit Human Rights First(HRF). In Fall 2017, we worked with HRF to serve Central American families fleeing violence and seeking protection in the United States. Building on that success, we decided to do it again this year.

Clinic students and other UDC Law student volunteers met yesterday with 10 asylum-seeking families from Honduras, Guatemala, and El Salvador. These families were previous detained at one of the nation’s three family detention centers, but were released to pursue their asylum claims while living with family and friends in Maryland. The families are all currently in removal proceedings before the Baltimore immigration court.  None of the families have yet found legal representation for their asylum claims.

In an era of immigration court backlogs, the court in Baltimore, Maryland, has actually has seen the highest increase since the beginning of FY2017 -- a stunning 96% increase in the last year of individuals put into removal proceedings–- doubling the court’s caseload.  Increases have also been dramatic in Massachusetts, Georgia, and Florida. As a consequence, the access to counsel gap is severe and many individuals appearing in Baltimore lack legal representation. In the immigration context, although only around 37% of non-detained immigrants are represented, legal representation makes it five times more likelyan individual will be granted relief.

As a small step in trying to address the justice gap, yesterday UDC Law’s Immigration Clinic completed 17 asylum applications total for the 10 families– the families will file these with the court in just a few days. Many of these cases presented complex legal issues, including those past the one-year filing deadline for asylum. While our Clinic lacks the capacity to take on full representation for each of these families, we hope that our work will set them on the right path and enable them to more easily find pro bono or low bono representation for their future hearings.

This work not only benefitted the asylum-seeking families, but our students, requiring them to engage in:

Participants in the workshop included 3L and 4L Immigration Clinic students, 2L students, including several who had served as Clinical Associates as 1Ls in their first year as part of UDC Law’s required community service, and two of whom who participated in our spring 2018 service-learning tripto Berks family detention center in Pennsylvania, an extended clinic student, 1L students, and a UDC 2018 graduate. Clinic Co-Directors Kristina Campbell and Lindsay Harris along with Clinical Instructor Saba Ahmed supervised students working for the day, along with HRF staff attorney Alexander Parcan and Legal Services Coordinator Sugeily Fernandez.  HRF’s two undergraduate interns and social worker were also on hand to assist. 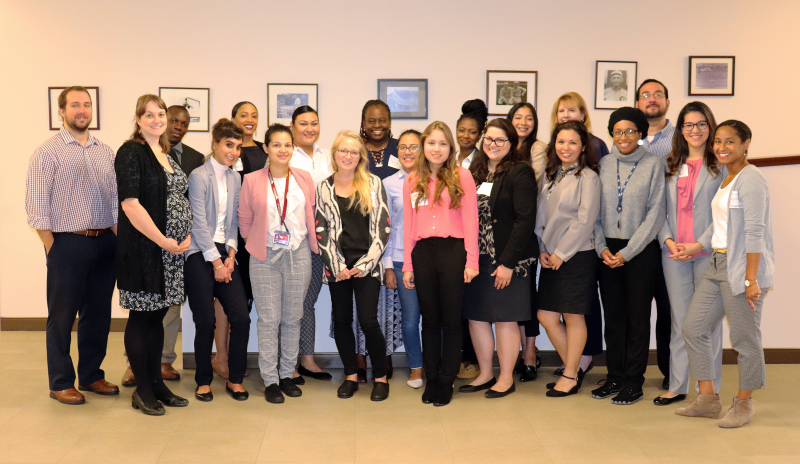 Photo above -- Many of the Clinic students and other volunteer students for the day, fresh-faced and ready to work in the morning, along with Professors Campbell & Harris and HRF staff.

Volunteer students are invited to debrief what was an intense, challenging, and at times no doubt emotional day along with students enrolled in the Immigration Clinic during our clinic seminar

Clinicians interested in replicating this program should feel free to be in touch with Professor Lindsay M. Harris. While there are numerous logistical challenges and hurdles, we find this experience well worthwhile and have tips to share. In many ways the day is a preview of what it is like to work in faster-paced legal services setting, contrasted with many traditional law school clinic models where “law in slow motion” may be the norm.  The workshops also provides an opportunity to generate interest in Clinic work and for 1L and 2L students not yet in Clinic to gain hands on experience and insight into an area of law in which many seek to gain exposure.

We are grateful to UDC Law staff and faculty for their support of this program.

I am very proud of our brilliant students in the Ninth Circuit Appellate Advocacy Clinic, under the direction of Prof. Jeremy Rosen.  Please see this story with video of their recent oral argument in San Francisco where they represented our client, a detainee suing the Maricopa County (Arizona) Jail for civil rights violations. They did excellent work.

Here is a brief description of the case:

The Ninth Circuit appointed the Pepperdine Ninth Circuit Clinic to represent pre-trial detainee Charles Byrd who filed a section 1983 lawsuit challenging Maricopa County’s practice of having female guards routinely observe male inmates at extremely close quarters while they are using the toilets and taking showers. Such cross-gender observations have been routinely disallowed when the guards are male and the prisoners are female and case law suggests the same should be the case here. The district court exercised its authority under the Prison Litigation Reform Act to dismiss Byrd’s lawsuit at the screening stage. The students argued on appeal that such dismissal was improper because Byrd plainly stated a claim for constitutional violation.

Columbia Law School will develop a program to train U.N. diplomats and personnel in negotiation techniques and conflict resolution, under an agreement signed this week by Columbia University and the United Nations Institute for Training and Research (UNITAR), based in Geneva, Switzerland.

As clinicians we know that our students do amazing work.  A lot of what we associate as clinical work falls into the client-case-court realm, but clinicians like Prof. Fran Quigley at Indiana University Robert H. McKinney's Health and Human Rights Clinic have expanded that work into the larger forum of policy advocacy, and with some amazing results.

Starting in Fall 2015, Prof. Quigley's students identified legal barriers faced by their clients, researched those issues, and then took it a step further by creating comprehensive manuals that, according to Prof. Quigley "...outline the scope of Indiana’s problem [regarding drivers license suspension fees], explain how it relates to the national landscape, and make thoughtful recommendations for how lawmakers can solve it."

Prof. Quigley's work is another inspiring reminder that we have many options as clinicians to engage our students in multiple types of advocacy, making our impact even greater for our communities as a whole.  To read more about this process and access the students' report, click on the link below.

Here is an op-ed I wrote for Gannett on the U.S. Supreme Court's decision in Paroline vs. U.S.:  http://www.statesmanjournal.com/story/opinion/2014/04/25/congress-listen-child-sex-abuse-victims/8172953/.  The battle to help restore victims of child pornography will now shift to Capitol Hill.  There is a critical role for law school clinics to play and I hope that you will consider joining the effort.