Duke’s Law & Contemporary Problems has published an issue in honor of Francis McGovern, Innovations in Complex Litigation and Settlement. Here are the details and links to the symposium contributions:

Yesterday, Judge Polster partially granted the plaintiffs’ motion for sanctions against the Allergan and Teva defendants in the In re: National Prescription Opiate Litigation MDL. The issue was “whether the Plaintiffs are entitled to some relief, given that they only recently received a critical document (‘the Cegidim Report’), even though the Court ordered the Report must be produced and even though Plaintiffs asked Allergan and Teva for it numerous times during discovery in the last 18 months.”

[I]f the Cegidim Report supported, rather than contradicted, assertions Teva and Allergan made in their summary judgment briefing, it seems awfully likely the defendants would have worked more diligently to find it. And that is the level of diligence that was required, regardless.

Here is the full order:

Yesterday, the Sixth Circuit issued a 2-1 decision in In re National Prescription Opiate Litigation, a much-anticipated case about the certification of a negotiation class in the Opioid MDL.

The majority reversed the district court’s certification of a negotiation class. Judge Clay’s majority opinion called it a “novel form of class action.” He observes that Rule 23 “does not mention certification for purposes of ‘negotiation’ or anything along those lines” and writes that “a new form of class action, wholly untethered from Rule 23, may not be employed by a court.” He also found that the district court’s certification of the negotiation class had “papered over the predominance inquiry” required by Rule 23(b)(3).

Judge Moore disagrees, with a 40+ page dissent that begins:

The Federal Rules of Civil Procedure were not written and have never been interpreted to manacle district courts that innovate within the Rules’ textual borders. The district court has breathed life into a novel concept—a class certified for negotiation purposes—to aid in its Promethean duty to secure the just, speedy, and inexpensive resolution of this byzantine multidistrict litigation. We should be in the business of encouraging, not exterminating, such resourcefulness. Certifying a negotiation class honors the Rules’ equitable heritage, complements the settlement class’s history, hews to Federal Rule of Civil Procedure 23’s textual requisites, and stirs no constitutional or policy qualms. So, with respect, I dissent.

The entire dissent is worth a read. Before proceeding to analyze whether the district court properly certified the proposed negotiation class, Part I of Judge Moore’s opinion addresses the proper approach to interpreting and applying the Federal Rules of Civil Procedure, and Part II provides an engaging history of Rule 23.

Here are the abstracts:

You can listen live to the audio at this link. Sitting on the panel are Judges Moore, Clay, and McKeague.

My personal thanks to the Pound Institute, Lewis & Clark, and Bob Klonoff for organizing a wonderful symposium, and to the law review editors for their excellent editorial work. It’s great to see the finished product!

Yesterday a Sixth Circuit panel issued its decision in In re National Prescription Opiate Litigation, granting the pharmacy defendants’ petition for a writ of mandamus regarding the district court’s order allowing the counties to amend their complaints to add new claims in advance of an upcoming bellwether trial. Judge Kethledge’s opinion begins:

The rule of law applies in multidistrict litigation under 28 U.S.C. § 1407 just as it does in any individual case. Nothing in § 1407 provides any reason to conclude otherwise. Moreover, as the Supreme Court has made clear, every case in an MDL (other than cases for which there is a consolidated complaint) retains its individual character. That means an MDL court’s determination of the parties’ rights in an individual case must be based on the same legal rules that apply in other cases, as applied to the record in that case alone. Within the limits of those rules, of course, an MDL court has broad discretion to create efficiencies and avoid duplication—of both effort and expenditure—across cases within the MDL. What an MDL court may not do, however, is distort or disregard the rules of law applicable to each of those cases.

The rules at issue here are the Federal Rules of Civil Procedure, which have the same force of law that any statute does. The petitioners seek a writ of mandamus, on grounds that, in three instances, the district court has either disregarded or acted in flat contradiction to those Rules. We grant the writ.

This text is for students taking courses in complex litigation, advanced civil procedure, or mass torts. It is also designed as a concise book for members of the bench and bar who are handling multidistrict litigation cases. Its focus is on all aspects of federal multidistrict litigation (MDL), including statistics on MDL cases; comparisons with other aggregation devices (such as class actions); the decision of the Judicial Panel on Multidistrict Litigation (the Panel) to centralize cases (including the standards for centralization and the selection of the MDL district court and judge); appellate review of Panel decisions; tag-along cases; the role of the MDL transferee judge (including case management, designating lead lawyers and committees, deciding motions, conducting bellwether trials, overseeing settlements, and awarding attorneys’ fees); choice-of-law issues in MDLs; personal jurisdiction and venue issues; remand of transferred cases; federal/state coordination (including state MDL statutes); and proposals for reform of MDL practice.

Now on the Courts Law section of JOTWELL is my essay, The Forest, the Trees, and Lone Pine Orders. I review a recent article by Nora Freeman Engstrom, The Lessons of Lone Pine, 129 Yale L.J. 2 (2019).

Yesterday the Fifth Circuit issued a per curiam opinion in In re: Chinese-Manufactured Drywall Products Liability Litigation. This appeal was brought by certain plaintiffs who had filed their claims after an initial class-wide settlement agreement. This lead to a subsequent agreement (the “New Claims Settlement Agreement”), which had “conferred to the District Court exclusive jurisdiction for the purpose of administering, supervising, construing and enforcing the Agreement.”

The Fifth Circuit panel (Judges Higginbotham, Stewart, and Engelhardt) dismissed the appeal for lack of jurisdiction, finding that these plaintiffs had waived their right to appeal: “In light of the explicit waiver in the New Class Settlement Agreement and the two additional and express waivers incorporated therein, we find that Appellants clearly and unequivocally waived their right to appeal.”

A couple of weeks ago, the Pound Civil Justice Institute and Lewis & Clark Law School sponsored a symposium entitled “Class Actions, Mass Torts, and MDLs: The Next 50 Years.”

The 11 papers that were presented will be published in the Lewis & Clark Law Review in the coming months. You can find more information about the symposium here, here, and here.

You can register to attend the symposium here. It’s free for judges, law clerks, academics, law students, and public officials. 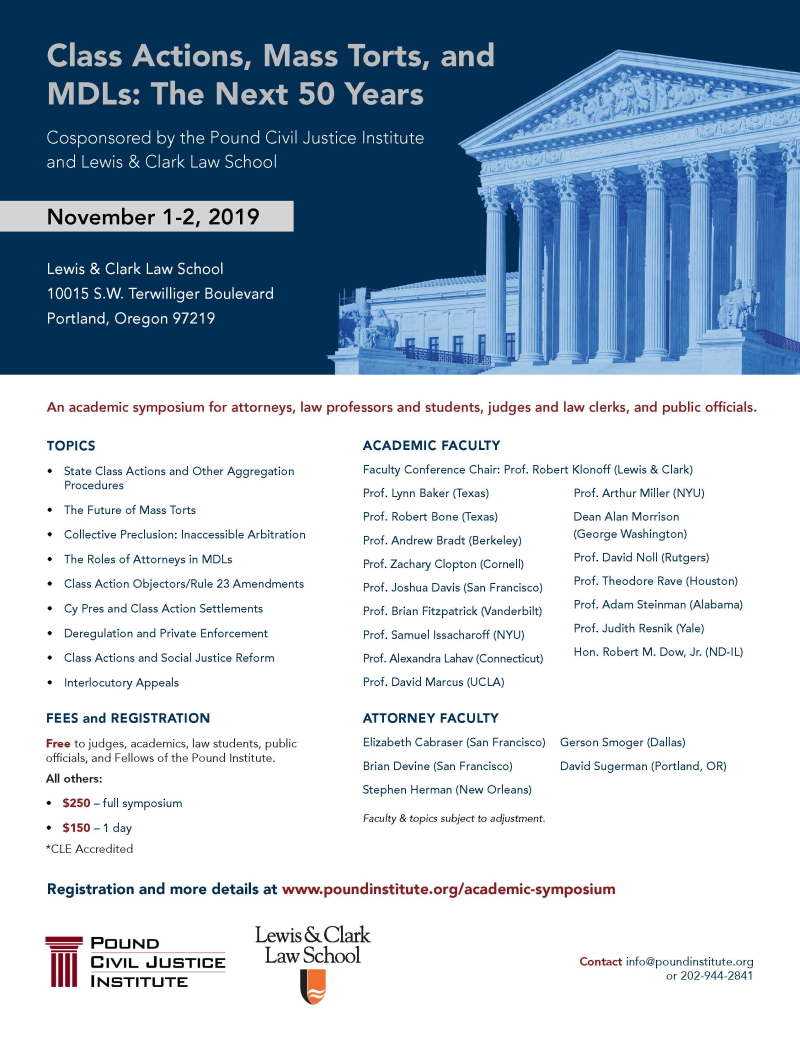 Contrary to the earlier panel ruling, the en banc Ninth Circuit affirms the district court with respect to both class certification and approval of the settlement.

Michalski on Gluck, Hall & Roberts on Courts and the Opioid Epidemic

Mullenix on MDL Non-Class Settlements and the All Writs Act

Commentators have identified that one of the most significant problems in current MDL practice is the lack of judicial authority over non-class aggregate settlements. This paper explores the use of the All Writs Act to provide MDL judges with robust authority to manage, supervise, and ultimately review non-class aggregate deals that are the object of much recent criticism. It rejects the thesis that judicial supervision of non-class settlements is unwarranted because these deals are contractual, and that oversight therefore removes claimant autonomy and damages the adversarial system. Several MDL judges already have invoked the All Writs Act to police parallel class action settlements that might jeopardize pending MDL negotiations. This paper explores and endorses the argument that MDL judges may, with equal force, exercise power pursuant to the All Writs Act to police pending non-class settlements in their jurisdiction.

As the MDL non-class settlement paradigm has evolved, some MDL judges have sought to intervene in settlement activities by invoking authority pursuant to three theories: (1) the quasi-class action, (2) the inherent powers of the court, and (3) the All Writs Act. As critics note, the quasi-class action and inherent judicial power have provided weak support for judicial intervention in non-class aggregate settlements. But to date, commentators have paid scant attention to judicial power under the All Writs Act or its use in MDL proceedings.

This week, NYU School of Law’s Center on Civil Justice is hosting MDL at 50 - The 50th Anniversary of Multidistrict Litigation. The conference is being held at NYU (Vanderbilt Hall, 40 Washington Square South, NYC) on Friday, October 12 and Saturday, October 13.

You can find the full schedule here.

The conference is free to attend. RSVP here.

Litigation against the Trump Administration has proliferated rapidly since the inauguration. As cases challenging executive actions, such as the “travel ban,” multiply in federal courts around the country, an important procedural question has so far not been considered—Should these sets of cases be consolidated in a single court under the Multidistrict Litigation Act? Multidistrict litigation, or MDL, has become one of the most prominent parts of federal litigation and offers substantial benefits by coordinating litigation pending in geographically dispersed federal courts. Arguably, those benefits would also accrue if “public law” cases were given MDL treatment. There also are some underappreciated strategic reasons why both plaintiffs and the government might want to invoke the MDL process in these cases—and we suspect that, sooner rather than later, one of these parties might give MDL a try.

In this Essay, we argue that although the MDL statute would allow for consolidation of these public law cases, there are prudential reasons why the judges in charge of MDL should stay their hands. In our view, these cases rarely achieve the efficiencies of most MDLs, and there is value to these cases undergoing scrutiny in multiple trial and appellate courts before they percolate upward to Supreme Court review. Moreover, consolidation of these cases would raise the political profile of the MDL process and thus might politicize the MDL itself as well as the selection of its judges. This politicization could undermine MDL’s primary role in mass tort litigation—and, indeed, it risks harming the national tort system more generally.