Pam Bookman, Brooke Coleman, and Dave Marcus have announced the CPW’s online works-in-progress series for summer 2021. Here are the details:

The organizers of the Civil Procedure Workshop (“CPW”), an annual gathering of civil procedure scholars, look forward to an in-person gathering at Northwestern University in May 2022.  In the meanwhile, we invite all interested in civil procedure scholarship to participate in an online works-in-progress series the CPW has scheduled for July 15, 2021, and August 12, 2021.  Both sessions will proceed from 1:00-3:00 pm east coast.  Anyone who wishes to present a paper on a topic related to civil procedure is welcome and encouraged to do so.  We will organize participants into small discussion groups, to enable all authors to present their work and receive feedback from colleagues.

Authors are encouraged to present their work in whatever form it takes.  Full drafts are welcome, but so too are shorter summaries or partially completed papers.

Those who do not wish to present their work are also encouraged to attend.  We hope that these sessions will give colleagues a chance to a gather, if only online, and continue to support our national community of procedure scholars that many of us enjoy so much.

You are encouraged to attend both sessions and are welcome to present at one, both, or neither.  If you plan to present your work, we ask that you submit your paper to the organizers by July 1, 2021, for the July 15 session, and by July 29, 2021, for the August 12 session, to give organizers a chance to assemble groups and distribute papers to participants.  If you are presenting a full draft, we ask that you also submit a ten-page excerpt that readers can particularly focus on in advance of the discussions.

Whether the court of appeals erred when it rejected the United States’ assertion of the state-secrets privilege based on the court’s own assessment of potential harms to the national security, and required discovery to proceed further under 28 U.S.C. 1782(a) against former Central Intelligence Agency (CIA) contractors on matters concerning alleged clandestine CIA activities.

You can find all the cert-stage briefing—and follow the merits briefs as they come in—at SCOTUSblog and at the Supreme Court website.

Coleman on Gadson on Stolen Plausibility

Today on the Courts Law section of JOTWELL is Brooke Coleman’s essay, Something Borrowed. Brooke reviews Marcus Gadson’s article, Stolen Plausibility, which is forthcoming in the Georgetown Law Journal.

Section 13(b) of the Federal Trade Commission Act authorizes the Commission to obtain, “in proper cases,” a “permanent injunction” in federal court against “any person, partnership, or corporation” that it believes “is violating, or is about to violate, any provision of law” that the Commission enforces. 87 Stat. 592, 15 U. S. C. §53(b). The question presented is whether this statutory language authorizes the Commission to seek, and a court to award, equitable monetary relief such as restitution or disgorgement. We conclude that it does not.

The Court’s analysis relies heavily on the interplay between §13(b) and other provisions of the Federal Trade Commission Act (§5 and §19) that deal explicitly with monetary relief. Justice Breyer concludes by observing:

Nothing we say today, however, prohibits the Commission from using its authority under §5 and §19 to obtain restitution on behalf of consumers. If the Commission believes that authority too cumbersome or otherwise inadequate, it is, of course, free to ask Congress to grant it further remedial authority.

Unless Congress intervenes, these amendments will take effect on December 1, 2021.

You can find the full transmittal package, including redlines and advisory committee notes, here.

In an interesting decision, the U.S. Court of Appeals for the D.C. Circuit has certified four questions to the D.C. Court of Appeals. The case is Akhmetshin v. Browder, which involves a defamation claim against a citizen of the United Kingdom. Personal jurisdiction in D.C. federal court depends on the District of Columbia’s long-arm statute, which the panel’s original opinion summarized as follows:

Section 13-423(a)(4) authorizes the “exercise [of] personal jurisdiction over a person” who has “caus[ed] tortious injury in the District of Columbia by an act or omission outside the District of Columbia.” Any such party over whom personal jurisdiction is sought must have satisfied one of three “plus factors” within the District. See Crane v. Carr, 814 F.2d 758, 763 (D.C. Cir. 1987). These factors are “[1] regularly do[ing] or solicit[ing] business, [2] engag[ing] in any other persistent course of conduct, or [3] deriv[ing] substantial revenue from goods used or consumed, or services rendered.” D.C. CODE § 13-423(a)(4). However, “entr[ies] into the District ... by nonresidents for the purpose of contacting federal governmental agencies [or instrumentalities]” do not factor into the jurisdictional calculus. Env't Rsch. Int'l, Inc. v. Lockwood Greene Eng'rs, Inc., 355 A.2d 808, 813 (D.C. 1976) (en banc) (explaining the “government contacts exception”).

Here are the certified questions:

1. May nonresident aliens who are citizens only of foreign countries invoke the government contacts exception?

2. If the first question is answered in the affirmative, must those nonresident aliens possess cognizable rights pursuant to the First Amendment generally, or any specific clause thereunder, in order to invoke the exception?

3. Does the government contacts exception extend to efforts to influence federal policy other than direct contacts with agents, members, or instrumentalities of the federal government?

4. If the third question is answered in the affirmative, what standard governs in determining whether activities not involving direct contacts with the federal government are covered under the exception?

Below are the details for Unpacking Iqbal, which will be co-hosted by the Chicago-Kent MLSA with the MLSA at UIUC and Georgetown:

Ashcroft v. Iqbal is known as the seminal case that every 1L agonizes over because it transformed the pleading standard starting in 2008. But this case goes beyond pleading standards. It is intertwined with questions surrounding qualified immunity, Xenophobia, Islamophobia and carries a holding that eerily resembles a rationale for blatant racism and discrimination. We have invited panel speakers Professor Alexander Reinert (who argued the case in front of the Supreme Court) and Professor Shirin Sinnar to discuss the impact that Iqbal has had on the entire American litigation system for ethnic and racial minorities. 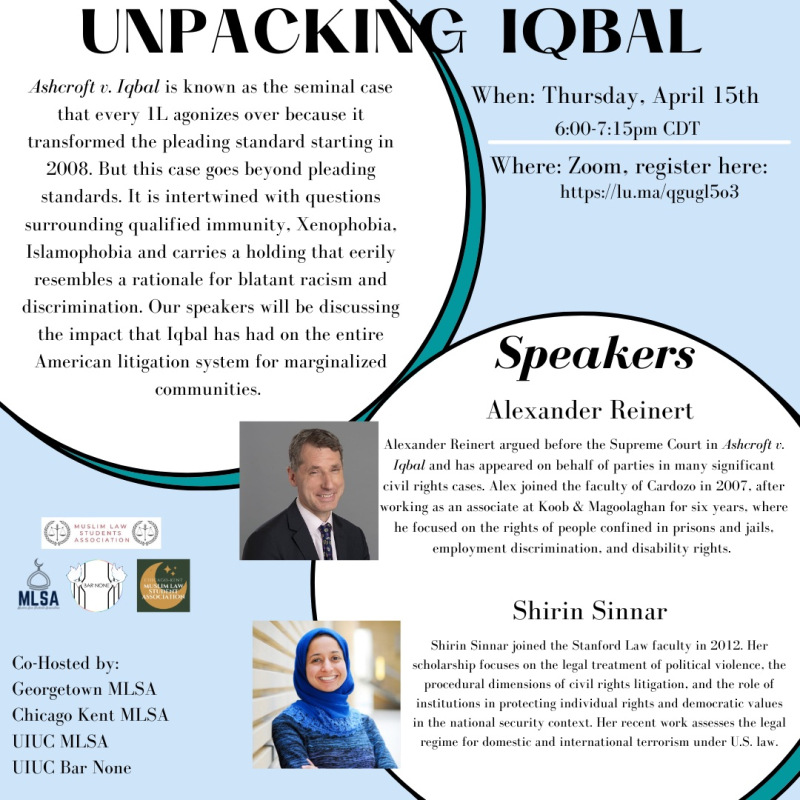 Last week the U.S. Court of Appeals for the Eleventh Circuit issued a decision in Circuitronix, LLC v. Shenzen Kinwong Electronic Co., which addresses (among other things) FRCP 6(a)(3)’s provision for extending a filing deadline when “the clerk’s office is inaccessible . . . on the last day for filing.”

In that case, the district court’s chief judge “had designated July 5 as a holiday such that ‘the Court will be closed.’” The Eleventh Circuit rejected the argument that “the clerk’s office remained accessible on July 5 because Kinwong could have filed its motion electronically.” Noting that “Rule 6 refers to the clerk’s physical office,” it held that “[t]he clerk’s office is inaccessible when its building is officially closed or otherwise unavailable, even if the parties are still able to submit filings electronically.”

Some Thoughts on the Google v. Oracle Decision and the Standard of Review for Civil Jury Verdicts

This week’s Supreme Court decision in Google LLC v. Oracle America, Inc. is mostly about copyright law. But there was a very interesting procedural question in the case regarding what standard of review the Court should use in connection with the jury’s verdict in favor of Google on its fair use defense. The answer is: it’s complicated. Justice Breyer’s majority opinion does say that “the ultimate ‘fair use’ question” is subject to de novo review. But he also states that “subsidiary factual questions” must be reviewed deferentially—and that deference ends up playing a very important role in the Court’s decision.

In this post I want to make two quick points about how the Court handles the standard of review issue. First, as I’ve argued in a recent article, I don’t think that Rule 50 of the Federal Rules of Civil Procedure, which provides that a court may displace a jury’s verdict only when “a reasonable jury would not have a legally sufficient evidentiary basis to find for the party on that issue,” allows a court to declare that a certain issue (like fair use) is categorically subject to de novo review. But second, Justice Breyer’s deference to the jury on implicitly-found “subsidiary” facts leads to an analysis of fair use that—at the end of the day—isn’t so different from the sort of deferential review Rule 50 would require.

In Brecht v. Abrahamson, 507 U.S. 619 (1993), the Court held that the test for determining whether a constitutional error was harmless on habeas review is whether the defendant suffered “actual prejudice.” Congress later enacted 28 U.S.C. § 2254(d)(1), which prohibits habeas relief on a claim that was adjudicated on the merits by a state court unless the adjudication “resulted in a decision that was contrary to, or involved an unreasonable application of, clearly established Federal law.” Although the Court has held that the Brecht test “subsumes” § 2254(d)(1)’s requirements, the Court declared in Davis v. Ayala, 576 U.S. 257, 267 (2015), that those requirements are still a “precondition” for relief and that a state-court harmlessness determination under Chapman v. California, 386 U.S. 18 (1967), still retains “significance” under the Brecht test. The question presented is:

May a federal habeas court grant relief based solely on its conclusion that the Brecht test is satisfied, as the Sixth Circuit held, or must the court also find that the state court’s Chapman application was unreasonable under § 2254(d)(1), as the Second, Third, Seventh, Ninth, and Tenth Circuits have held?

You can find all the cert-stage briefing—and follow the merits briefs as they come in—at SCOTUSblog and at the Supreme Court website.

Here is the announcement and registration details:

Stetson Law Review is pleased to announce its Spring 2021 Virtual Symposium: Civil Procedure Transformation After Fifteen Years of the Roberts Court.  The Symposium will be held virtually on Friday, April 9 from 1-4:30 p.m. Panels will discuss the Roberts Court’s transformative influence on personal jurisdiction doctrine, court access and choice, as well as the adjudication process. More information on the panels and panelists can be found at https://www2.stetson.edu/law-review/symposia/.

The event will be held over Zoom. If you would like to attend, please email lrmarked@law.stetson.edu or register directly at https://lnkd.in/eggmuJM.

Today the Supreme Court issued its decision in Google LLC v. Oracle America, Inc. By a 6-2 vote, it holds that Google’s copying of a portion of a computer program owned by Oracle constituted “fair use” for purposes of federal copyright law. The opinion is focused mostly on substantive copyright law, but—as covered earlier here and here—the posture of the case prompted some interesting procedural questions. The jury had ruled in favor of Google on its fair use defense, and the Supreme Court asked the parties to file supplemental letter briefs addressing “the appropriate standard of review” regarding fair use, “including but not limited to the implications of the Seventh Amendment, if any, on that standard.”