How to Improve Your State's "Lawsuit Climate": Reduce the State's Population

So you send a survey to people whose job depends on how well they do defending their $100-million-plus employer in court and ask them how fair and reasonable the courts are.  If they just lost a big verdict in Texas, they probably think juries in Texas are unfair and the judge who tried the case is an idiot.  (A friend who was born and raised on a farm said that it was like asking foxes to rate how fairly the farmer guarded the henhouse.)

Compile all those subjective answers, assign some ordinal numbers to them, and rank the fifty states: that’s about the long and short of the U.S. Chamber Institute for Legal Reform’s 2015 "lawsuit climate survey" conducted by Harris Poll "to explore how fair and reasonable the states’ tort liability systems are perceived to be by U.S. businesses."  (The full report is here.)

To be fair, if you read the report carefully, it does not misrepresent what it purports to show.  It never says it is a random survey (and it isn't).  It explains that the only people asked to participate are lawyers and other executives who are in charge of litigation for companies with at least $100 million in annual revenues.  (It doesn’t say, but it’s fairly obvious, that these companies are overwhelmingly defendants, not plaintiffs, in lawsuits.)  The report admits that what it measures are these executives’ “perceptions” (p. 3 of the Executive Summary), not any objectively quantifiable element of a state’s justice system, such as the caseload per judge.

But the sheer repetition of the ensuing headlines (egged on by the Chamber's state-specific press releases) encourages the casual reader to elide the difference between objective reality and the subjective perceptions of a very distinct interest group.  A sampling:

Anyway, the purpose of this post is not to go through the myriad glaring problems with the survey. But I can't resist pointing out one of many examples: the survey respondents really couldn't help calling Cook County, Illinois or Miami-Dade County "among the worst city or county courts."  That is because the survey respondents were given twelve listed locations to pick from, which included those two locations, and the respondents would have had to think of any other jurisdiction on their own. Question 637 (p. 127 of the full report) is:

Thinking about the entire country, which of the following do you think are the worst city or county courts? That is, which city or county courts have the least fair and reasonable litigation environment for both defendants and plaintiffs? Please select up to two responses.

99 Decline to answer [EXCLUSIVE] [PHONE ONLY]

The twelve listed locations were randomized for each survey respondent, so they were not necessarily listed in the order above for any given respondent.  But it's a great example of the availability heuristic.

Anyway, setting aside the problems with the survey, I noticed this: in general, the fewer people who live in a state, the better that state's "lawsuit climate" is perceived.

Many of the top-ranked states (with the “best” perceived “litigation climates”) in the Chamber's survey are states with the fewest people.  Using census data for 2014, I ranked the states from 1 to 50, from most populous to least populous.  For example, California has the largest population, so is ranked #1, and Wyoming has the fewest people, so it's ranked #50.  I then compared the 15 least populous states (ranked 36-50) with the "best" 15 states in the U.S. Chamber's survey (ranked 1-15).  Ten states were on both lists: Alaska, Delaware, Idaho, Maine, Nebraska, New Hampshire, North Dakota, South Dakota, Vermont, and Wyoming.

In other words, the Chamber rankings are negatively correlated with the population rankings: in general, as the state's population goes down, the perception of its "lawsuit climate" goes up.   Here is a scatterplot of the fifty states and a fitted line: 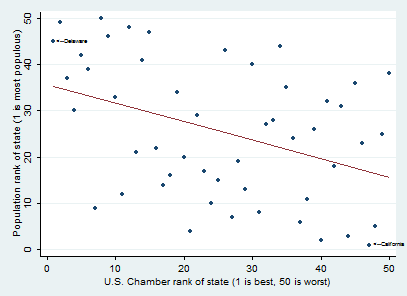 So what does this all mean?  Of course, correlation is not the same as causation.  But maybe if there are fewer people, there are fewer things to go wrong (industrial accidents, adverse drug reactions, discriminatory employment decisions), so there are fewer lawsuits.  Just a simple-minded theory.