Last Wednesday, the Justice Department announced the resumption of the controversial equitable sharing program, which had been on hold for the past four months. The program allows police departments to seize and retain citizens' personal property without charging them with a crime; and, if one is charged with a crime, the police can retain possession of the seized property even when charges are dropped or the accused is found innocent. The police must only suspect that the property was somehow linked to a crime. The threat of abuse is obvious, and not merely hypothetical.

Of course, the inequalities that pervade the criminal justice system are present in the execution of the program. Indeed, the Center for American Progress recently released this report finding that the program most dramatically (and unsurprisingly?) affects minorities and those living in low-income communities. Here's the abstract: 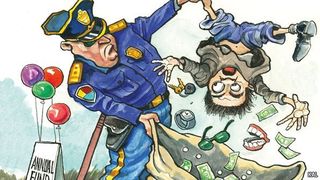 In the United States, the basic tenet of the criminal justice system is that one is presumed innocent until proven guilty. However, over the past several decades, many thousands of people across the country have had their property seized by the government without being charged with a crime. Regardless of these individuals’ innocence, their cash, homes, cars, and personal property can be taken if law enforcement believes it was involved in a crime or if it is the proceeds of a crime.

This practice, known as civil asset forfeiture, was established as a tool to dismantle criminal organizations. But over the past 30 years, the use—and in many cases abuse—of this practice has spiraled well beyond the purposes for which it was created. In recent years, civil asset forfeiture has come to create perverse incentives that can lead law enforcement agencies to seek profit over justice.

For many years, one of the primary drivers of these perverse incentives has been a federal practice called equitable sharing. Under this practice, state and local law enforcement can have a seizure adopted by the federal government—that is to say, placed under federal jurisdiction—and be allowed to keep up to 80 percent of the proceeds from the adopted seizures, with the remaining 20 percent going to federal agencies. Some $3 billion in seizures were distributed through equitable sharing between 2008 and 2014.

Amid media and public controversy around the program, equitable sharing was curtailed in 2015 by then-U.S. Attorney General Eric Holder. While the new federal policy that Attorney General Holder put in place last year was without question a step in the right direction, it left room for continued abuses. Today, congressional lawmakers continue to work on a bipartisan basis to pass federal legislation to achieve further reform. Moreover, many states still have laws on the books that permit unjust and harmful civil asset forfeiture practices. Without additional reform, innocent people across the United States will continue to face seizure of their cash, vehicles, and even homes—many without ever having their day in court.

In Michigan, for example, an elderly disabled woman had every penny of her savings taken by law enforcement—money she had received from disability payments and a car accident settlement—even though the government had not proven that it was connected to illegal activity. This left her unable to challenge the seizure because she had no funds left to post the bond in court. A low-income Philadelphia grandmother had her house seized because her niece’s boyfriend was accused of selling drugs outside her home. And a Los Angeles taco truck owner had thousands of dollars of earned taco sales taken by law enforcement despite no evidence of criminal activity. While he initially challenged the seizure, he was forced to drop the case because it was too expensive to fight and he feared the legal proceedings would risk the deportation of his relatives.

Although civil asset forfeiture affects people of every economic status and race, a growing array of studies indicates that low-income individuals and communities of color are hit hardest. The seizing of cash, vehicles, and homes from low-income individuals and people of color not only calls law enforcement practices into question, but also exacerbates the economic struggles that already plague those communities.

Making matters worse, these individuals are the least able to shoulder the cost required to regain their property through complicated legal proceedings that are heavily weighted in favor of law enforcement. Moreover, because there is no constitutional right to an attorney in forfeiture cases, property owners who cannot afford legal representation are often left with no choice but to attempt to represent themselves in court.

Fortunately, as bipartisan outrage at unjust civil asset forfeiture practices continues to grow across the United States, policymakers have a unique opportunity to find common ground and enact laws that restore forfeiture to its original purpose. While federal reform is urgently needed, states can do a great deal to protect their residents—and especially vulnerable populations—from the abuse of civil asset forfeiture laws.

This report provides an overview of the rise of civil asset forfeiture abuse by law enforcement, highlights the impact of these abusive practices on low-income individuals and communities of color, and offers steps that state policymakers can take to prevent civil asset forfeiture abuses from pushing already struggling families and communities into or deeper into poverty.